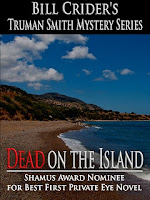 Dead on the Island: Private-eye Truman Smith returns to his hometown of Galveston, Texas, to investigate the disappearance of his sister. He runs into people from his past, finds a cat, and gets into a lot of trouble. Publishers Weekly says that Smith is "another well-drawn protagonist, this time a moody, introspective PI in the finest tradition, who works in a seamy city smoldering with old and dangerous secrets. "

Gator Kill: Who'd investigate the killing of an alligator? Private-eye Truman Smith would. Publisher's weekly says: "Soon the brooding gumshoe is stumbling over the bodies of dead humans, is shot at and run down by a souped-up four-by-four as he's embroiled in a plot complete with crooked police, a possible land-grabbing scheme and bad guys who, but for their lack of redeeming good nature, could be Damon Runyon inventions."

When Old Men Die: Does anybody care when old men die? Private-eye Truman Smith does, and he's going to find out who's responsible, even if it kills him.

Since they're by a member of my handpicked Collective they all come highly recommended!
Posted by jvdsteen at 1:03 AM

Wow... Thanks.. I'm at the first time on your blog! And I like it! Thanks for sharing info. Keep up the good work.