When Special Forces types retire in thrillers you know they eventually will have to take up arms again. Adam Wolf is no exception. He makes his living as a young adult author these days but used to be in covert ops .
Being  treated to a dinner for his 60th birthday Wolf witnesses a brutal mob hit. The killers are now out to get him. Wolf isn't one to sit back and wait to get terminated though, so along with two of his buddies he sets out to take the fight to the mobsters.
This is nice, fast-paced thriller in the Joe Pike / Jack Reacher style. Wolf has a pretty funny, wry voice and is a competent action hero. It's also nice to see there are some action heroes that manage to have real relationships and that even if you're 60 years old that doesn't mean you don't like a bit of sex and violence. 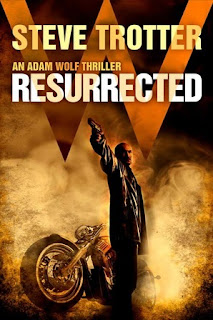 Great stuff for fans of action-packed heroes! Buy it here.
Posted by jvdsteen at 12:35 PM