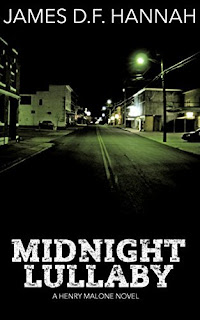 I discovered this one via Kevin Burton Smith's awesome Thrilling Detective website. Kevin of course knows his PI's so if he says this is one to watch I take not. Man, was he right!
Former State Trooper Henry Malone is kind of a mix between Spenser and C.W. Sughrue or better yet, a darker version of Rafferty. He's not an official PI but does some favors for friends, aided by his buddy and AA sponsor Woody. That's the kind of team I've loved since Spenser.
In this first novel he is asked to track down a missing young mother. He gets involved with neo-Nazis, meth labs and sleazy lawyers.
What makes this one such a winner is the way Hannah walks the line between the action-packed and witty style of Robert B. Parker with the dark style of say James Lee Burke and Andrew Vachss. He manages to tick every box I like in PI fiction, making me probably his biggest fan.
Posted by jvdsteen at 6:15 AM