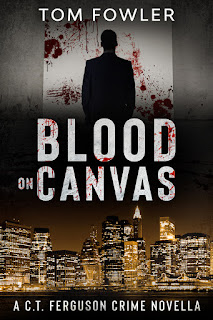 The C.T. Ferguson series always reads like you are watching a TV show and this one does more then ever.

In this one Ferguson tries to find a stolen painting that is exceptionally bad. Why would anyone steal that is one of the biggest mysteries.. What follows is a fast-paced story with Ferguson taking on some drugrunners ending in an action-packed finale.

I love the concept where Ferguson works for his clients without pay, but gets paid after closing the case by his rich parents. This concept, and the pacing of the series always keeps me coming back.

This one might go a bit overboard for me in the NCIS-routine though. Just a bit too much Feds showing up, almost too much action and too much computer wizardry. It just became more of a thriller than the kind of PI mystery I love. I should say though, that the computer stuff is believable (Fowler works in IT) and not the Sci-Fi stuff you see in the Magnum reboot and the NCIS shows. Also, I will admit Tom Fowler writes great action scenes. What I like about how he does that is that he uses minimal description of the fights which really makes you ''see'' the action in your mind without slowing down the scene. There's some nice ass-kicking in this one.

You can pick up this novella as part of this bundle: https://books2read.com/deadsilent/