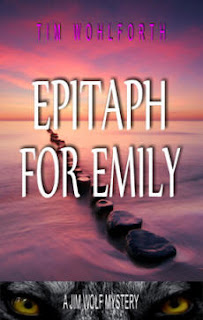 I've enjoyed Tim's work online for years now, I even did a split with him (which you can get for free here) featuring his PI Jim Wolf and my own Noah Milano.
I liked reading about Jim Wolf in this full length story. Jim sleeps with an attractive young girl that ends up murdered. Suspected of this murder he is forced to investigate in order to prove his innocense. If that isn't enough he's also visited by his mother who's in trouble with the mob and leads him to another mystery to be solved.
Jim Wolf is a classic PI with a few cool characteristics like the snake on his houseboat featured in a classic mystery which shows the best motives for murder can be found in the past.
If you like mysteries that take it easy (don't expect Mike Hammer pacing) and feature characters with deeper feelings and a plot with historical plot points this one is for you.
Posted by jvdsteen at 7:16 AM