On the Ropes (Duffy Dombrowski) by Tom Schreck 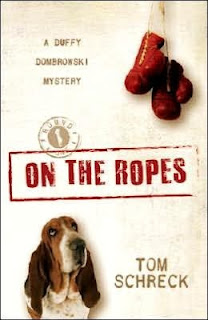 This one is sure to tickle your funny bone, even though some of the subject matters are pretty damned dark.
Boxer, social worker and Elvis fan Duffy Dombrowski debuted in this baby years ago, but I finally picked it up on Kindle. Asked to help out his cop buddy Kelley with the arrest of a drug abusing mother he gets involved in the investigation of her missing daughter and ends up adopting her Muslim basset hound, Al.
The investigation leads him right to an awful band of pimps and a terrorist plot. Tom did an amazing job of getting the various story threads to come together in an action-packed conclusion.
Duffy is a great character, and I really liked hanging out with him and his assorted damaged and boozing friends. The friends that gather in his favorite bar did remind me a lot of the homeless friends of GM Ford's Leo Waterman series, just like the tone of the story did. So, if you're a fan of Waterman pick this one up as well. There's also some similarities to another wiseass boxer with a dog (Duffy even points that out himself), so this one might also appeal to fans of Robert B Parker.
The star of the show might be Al, though. That dog had me laughing out loud a lot of times and he really ends up being the biggest hero of this tail... er... tale.
Posted by jvdsteen at 12:35 AM

I'm a big fan of Schreck's work. He's able to tread the line between his humor diminishing the seriousness of his situations and the seriousness killing the humor as well as anyone. I've read two of his books (not this one yet) and will be back for more.