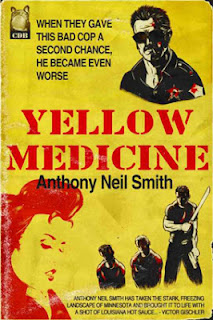 Wow, this Billy Lafitte character has some attitude. He's a Minnesota cop that takes bribes, drinks too much and blackmails girls into sleeping with him. He's got a soft spot for young rockabilly girl though (I totally fell in love with her as well) which makes him just a bit more of a nice guy.
He ends up helping a boyfriend of an old sexual conquest with some problems with drugdealers. Little did he know there's some terrorists involved, a situation that may cost Billy's life.
Lafitte is just way cool. He's a bastard, but you will love him. He gets away with all kinds of politically incorrect stuff that our darkest testosterone filled side would love to get away with as well. Very entertaining, grim but sometimes just as funny. And any book mentioning the Horrorpops just has to be good.
Posted by jvdsteen at 1:44 AM

Jochem, I must admit I didn't enjoy this one as much as his earlier books, Psychosomatic, The Drummer or the excellent last one of his All The Young Warriors. That said, I did get the 2nd Lafitte book, but I haven't got to it yet.