Q & A with Dick Lochte 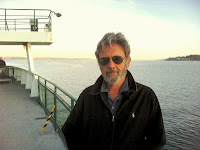 Dick Lochte, author of the Leo Bloodworth novels and mystery critic is coming out with a new series featuring Dave "Mace" Mason. We interviewed him about it...

Q: What makes Dave Mason different from other (unofficial) PIs?
Well, let’s see. He doesn’t wander from town to town staying under the radar. He’s not a sports agent with a psychotic friend, doesn’t work for a newspaper, wasn’t a sniper during a war, is not a former cop and isn’t even a recovering alcoholic. To answer the question seriously, what makes him different -- at least in the beginning of the book -- are his flaws, most of them the product of his promising future being derailed by an incident that happened in college. He did something heroic and was punished for it. That same thing happened again and, that time, he was sent to prison. It left him unmotivated, withdrawn, overly suspicious and angry. He’s a guy in need of purpose, action and romance and, in the course of the book, that’s what he gets, for better or worse.

Q: How did you come up with the character?
I have the actor Robert Mitchum to thank for that. Many years ago, at the start of my journalism career, I interviewed him. We spent several hours talking and drinking and, later, I decided to write a film for him, whether he wanted it or not. As it turned out, he didn’t. The hero of that script was Mace, a little older and less defined but basically the same as he appears in Blues in the Night. Other than that, there’s not much similarity between the novel and the screenplay. But for me Mace is pretty much the Mitchum of Out of the Past, only with a slightly rosier future.

Q: Why did you decide on an ex-con as a protagonist and LA as the setting?
I’m interested in the way people and places change over the years. One of my earlier, official private eye novels, The Neon Smile, consists of two parts. The first covers the investigation of a series of crimes in 1960s New Orleans. The second, set in NOLA in the 1990s, follows PI Terry Manion as he reworks that case and we see how three decades have changed the city and the involved characters. I wanted Mace to return to Los Angeles, after having been away for a long time, to find a city and friends and enemies who have changed enough to confuse him and add to his vulnerability. Making him an ex-con solved the problem of where the years went. It also toughened him and explains his cynical mood and surly attitude at the start of the novel.
Why L.A.? It’s that old bromide of writing what you know. I’ve lived primarily in three cities, New Orleans, Chicago and Los Angeles. Of them, modern day L.A. is the one I know best and I wanted the city to play a big part in Blues.

Q: What are your thoughts on the whole eBook revolution?
Short answer: I like it. More people are reading. More writers are making a few bucks. More forests are being saved. My two New Orleans books, Blue Bayou and The Neon Smile , are getting the eBook treatment (and being put back into print) by Perfect Crime Books. My early PI novels, Sleeping Dog and Laughing Dog, are on their way to eBook formats, through my own company, Laughing Dog Entertainment. So I’m happy as a clam.

Q: What's next for you and Mason?
I’m just finishing book two. In it, Mace tries to protect a young woman from a hit squad that has successfully removed six other witnesses to a murder. I had hoped to call it Midnight Sun (like Blues in the Night, a Johnny Mercer song title), but I just discovered that Stephenie Meyer is using that for her new Twilight series addition. So maybe I’ll have to go with something else.

Q: How do you promote your work?
These days, most of my promotional activity is via the Internet, though I’m happy to visit and do readings at libraries and whatever book stores are still standing. I also hit as many mystery conventions as I can. There are, in fact, quite a few ways of getting the word out, but there are only a limited amount of waking hours and you have to use some of them to write the next book.

Q: What other genres besides crime do you like?
I used to read a lot of science fiction and humorous shorts and novels, but once I began reviewing crime novels for the Los Angeles Times in the Nineties, that changed. Now it’s pretty much crime all the time, interspersed by some non-fiction, mainstream and the occasional graphic. If you want to get into genre-splitting, I’ve always had a preference for PI novels and, thanks to Chandler providing my introduction, to PI novels with hardboiled humor.

Q: What's your idea about the psychotic sidekick in PI novels like Hawk and Joe Pike?
What with today’s political correctness and technology, crime writing has become a tough racket, creatively speaking. You have to twist plots into pretzels to get your detective into a situation he can’t phone his way out of. And try hiding the identity of a killer when every street in town is monitored. If sidekicks, psychotic or sociopathic, can ease the burden, more power to them. Not only do they give the hero a free pass on the nastier elements of the job, they also carry some of the exposition load, and, in some cases (Mouse, Bubba, Clete Purcell), provide a touch of dark humor and/or pathos. In my books about Terry Manion, I use a New Orleans homicide cop named Eben Munn who everybody assumes is certifiable. Props to Bob Crais for elevating his sidekick to lead, a brave move that paid off.


Q: In the last century we've seen new waves of PI writers, first influenced by Hammett, then Chandler, Macdonald, Parker, later Lehane. Who do you think will influence the coming generation?
Interesting question. I have a hard time narrowing stylistic influences. I still pretty much subscribe to Macdonald’s comment that we all came out from under Hammett’s black mask. Or, to use your analogy, our characters are all sons of Spade. There was a time when it seemed that Grafton and Paretsky would be the big influences on the new PI generation if for no other reason than gender. But that trend drifted off into chick lit which seems to have hit a dead end. I guess I feel that the coming generation is going to be influenced by the same top three, Hammett, Chandler and Macdonald, with Parker adding the sociopath sidekick and bits of the PI’s personal life. But the biggest influence will come from the marketplace. By that I mean it’s the thriller novelists, the ones writing what publishers call “big books”, who will hold the biggest sway over the new PI writers. You can see the evidence in even a seasoned hand like Crais whose recent books read more like adventure yarns than detective novels and feature as many points of view as the average spy yarn.

Q: James Tucker came up with the following question: Have you ever been involved in a crime?
Directly involved? If you mean holding the gun, no. But while I was in college in New Orleans, I made a few extra bucks working for a detective agency, mainly helping to repo automobiles or sitting in a parked car, witnessing a husband (or the occasional wife) entering and leaving the house or apartment of someone other than their spouse. Some nights, I’d go to one of the French Quarter clubs (the drinking age was 18), where I’d sit at the bar, try to stay sober, see how much of the money that crossed the bar failed to reach the cash register and make out a report for the owner. I did this until the night a waitress whispered in my ear that the bartender suspected I was a “spook” (the term then used for someone who did exactly what I was doing) and had sent for some friends to teach me a lesson. That’s the closest I came to an involvement.

Q: What question should we ask every PI writer we interview and what is your answer?
I guess the question would be: what made you want to write PI novels?
I know exactly how that came about in my case. I was in my early teens, visiting a friend’s house, when I saw a paperback book resting on a table. It belonged to my friend’s older brother. On its cover, a guy who looked like the actor Gregory Peck, dressed in hat and trench coat, had opened a door on a beautiful naked girl tied to a chair. Would his brother mind if I borrowed the book? Not at all. That’s how I wound up reading The Big Sleep, prowling through bookstores for more Chandler. And then Hammett Followed by Macdonald and Parker . Some fifteen years and hundreds of PI novels later, I decided to write my own, Sleeping Dog. It was nominated for the Edgar, the Shamus and the Anthony and won the Nero Wolfe Award and I was on my way.
Posted by jvdsteen at 1:13 AM

Hello there, simply become alert to your weblog thru Google, and fosbobetund that it’s really informative. I’m gonna watch out for brussels