Q & A with Will Viharo 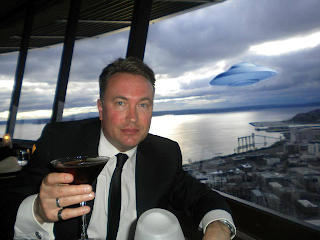 I am proud to be the first to interview the talented Will Viharo about the Gutterbooks edition of his novel Love Stories Are Too Violent For Me.

Q: What makes Vic Valentine different from other hardboiled characters?
He's not really hardboiled! He only projects that image in order to navigate dangerous terrain at times. But it's merely self-delusion. He's really a soft-hearted, soft-headed sap. The only thing hard about Vic is his dick. He's only a private eye because he's otherwise unemployable. His skill set is limited to luck and determination. He's sort of a hybrid of Holden Caulfield and Philip Marlowe - a introspective outsider.


Q: How did you come up with the character?
At the time (circa 1993), I was working as a delivery driver for a blood bank - another in a long series of odd jobs I took to survive while I pursued my literary career. Naturally, I hated it, and sublimated my frustration into my art. Also around this time I was being actively courted by big shot New York editor Judith Regan, who was very interested in publishing something by me. I'd already sent her some of my previous manuscripts - including my Runyonesque fable Chumpy Walnut, my sexy-violent satirical crime novel Down a Dark Alley, and my stylistically experimental psycho-noir Lavender Blonde - but wanted to come up with something fresh. During a phone conversation with my father about my latest romantic catastrophe, I just threw out the line "Love stories are too violent for me," and when he laughed, I knew I had the title. The name "Vic Valentine" popped in my head, since i love alliteration, and then the first line: "People tell me I live in the past. We all live int he past, I tell them. We just don't know it yet." I also knew the last line of the book would be the title. From there I borrowed elements of my personal life and embellished them, much like Charles Bukowski did with Henry Chinaski, or John Fante with Arturo Bandini. Vic was sort of my doppelgänger, but I embed him qualities that were diametrically opposed to some of my own personal traits, just so it wouldn't be thinly veiled autobiography, but a revisionist pulp saga geared for general public consumption that was secretly informed by private events. He's not so much my doppelgänger as he is my undercover man in the field, taking orders only from me, doing my dirty work and taking all the blame, while I get all the credit.


Q: What are your thoughts on the whole eBook revolution?
It's convenient and expedient for those who want to publish quickly and reach their audience directly, circumventing the usual drama and politics associated with traditional publishing, which ironically has contributed to its sudden downward spiral. As someone whose knuckles are bloody from banging on doors nobody would answer for so many years, it's nice to see the major publishers losing their elitist stranglehold on the marketplace. Their professional editorial services should still set the industry standard, but beyond that, they've made their own beds by being such snobs for so many years (with notable exceptions, mostly among the small presses). As for the actual format, I personally prefer print, but the fact is I don't care what format readers choose, as long as they keep reading.

Q: What's next for you and Vic Valentine ? Will he return?
Definitely. The sixth novel in the series, "Hard-Boiled Heart," is in progress - sort of. It's being serialized in the annual all-nude Nightcap editions of Bachelor Pad Magazine. So far there have been two installments - "Private Dick, Public Enemy" and "Space Needle Fix." As you know the previous sequels are self-published as two "double features" - Fate Is My Pimp/Romance Takes a Rain Check and I Lost My Heart in Hollywood/Diary of a Dick. Hopefully if the reissue of Love Stories does well enough, Gutter will pick up the entire series. I'd love to develop that relationship with them. My editor, Joe Clifford, a rising pulp titan in his own right, has been fantastic to work with. They're all very respectful and cool with authors. I'm very happy to be a part of their team.

Q: How do you promote your work?
Social media, mainly, and via press connections i made made while a full time film programmer. I have a rather popular, pre-existing public platform left over my cult movie cabaret show, called "Thrillville," which hasn't really translated into a massive readership so far. I'm known more as a "movie guy." I'm really just a pulp fiction guy, though movies - particularly of the outré, exploitative variety - greatly influence my work.

Q: What other genres besides crime do you like?
Horror definitely, and some sci-fi, as long as it's grounded in reality. I'm not a big Star Wars of Lord of the Rings kinda cat, though I respect their cultural impact and enormous fan bases. I'm just not a big fan of epic storytelling in general, with those massive casts of characters, grand settings, invented languages, etc. I prefer smaller, darker, more intimate fantasies, set in familiar surroundings that have been slightly tweaked to resemble a waking nightmare, a la The Twilight Zone. One of my favorite horror authors is H.P. Lovecraft, and one of my favorite sci-fi writers is the late Richard Matheson. But my own horror works - A Mermaid Drowns in the Midnight Lounge (my personal favorite of my own books) and the bizarro novella Freaks That Carry Your Luggage Up to the Room - are influenced much more by cinema than literature, particularly the films of David Lynch and to a much lesser extent, George Romero. My one sci-fi novel, It Came From Hangar 18, co-written by the guy who commissioned me to write it, Scott Fulks, so he could inject his real scientific formulas into my excessively exploitative, explicit text, actually is an epic that begins quietly in Alameda, CA and ultimately extends across the world and the galaxy. But tonally it's closer to the satires of Kurt Vonnegut and Douglas Adams than the more serious, visionary works of Philip K. Dick or Ray Bradbury, two other writers I greatly admire, but do not even try to emulate. Hangar 18 is basically the ultimate B movie in literary form. I'm very proud of it, and all of my published books, though as I said, Mermaid is my personal favorite, because it blends all of my obsessions - noir, horror, pornography, retro pop culture - in just the right doses.

Q: What's your idea about the psychotic sidekick in PI novels like Hawk and Joe Pike?
Haven't given 'em much thought, though I love Robert B. Parker's witty repartee. I prefer to work alone. I hate people, generally speaking, though I love humanity, if that make any sense. My cats are my sidekicks, and my wife is my muse. That's all I need, and my characters share my solitary personality and individualistic perspective.


Q: In the last century we've seen new waves of PI writers, first influenced by Hammett, then Chandler, Macdonald, Parker, later Lehane. Who do you think will influence the coming generation?
Probably the writers who have most influenced me - James Lee Burke, Carl Hiaasen, James Ellroy, Walter Mosley, and Barry Gifford, to name a few. They're older but all still very active. I haven't really kept up with my own contemporaries, though Joe Clifford and Tom Pitts are definitely names to watch.

Q: Why do you write in this genre?
Ironically, not for the same reasons most fans list. I'm not really a fan of conventional mysteries and straight-up adventure stories per se. I could care less about the stories being told. I'm more into the experiences being related. For me it's all about the Voice. I'm never been a big plot guy. All the stories of mankind's many foibles and follies, quests and quirks have already been told, over and over. Only the fashions and language changes. For me, it's how they're being told. I have trouble following most plot lines anyway, since I'm concentrating too much on style, syntax and sentence structure, more so than things like character development. My favorite writers growing up were Damon Runyon, Raymond Chandler, and J.D. Salinger. They're still my top three, probably, but after devouring samples from every literary genre I could, reading all the classics by the likes of Hemingway and Fitzgerald on up through contemporary giants like Joseph Heller, Thomas Pynchon, John Irving, Richard Price, etc., I realized the writers whose voices resonated most passionately with my own heart and world view were the "lower tier" pulp guys like Jim Thompson, David Goodis, and Charles Willeford. I related to their tortured souls. Their work transcended the typical perimeters of the form and genre, delving deeply into the human condition and revealing often ugly stuff other writers barely hinted at, since the best selling guys were often constrained not by their creativity but by their mainstream publishers pandering to a safe, cookie cutter mentality. Socially acceptability is often artistically restrictive. It's like why I mostly prefer sleazy grindhouse cinema over big time "respectable" blockbusters. I just dig the honesty.
Posted by jvdsteen at 1:57 AM

Labels: Q and A, Vic Valentine, Will Viharo

Great interview! Thanks for broadening my perspective on what makes Wil, the International Man of Mystery, excel at whatever he delves into.

So many tasty tidbits, but I especially liked, "...I realized the writers whose voices resonated most passionately with my own heart and world view were the "lower tier" pulp guys like Jim Thompson, David Goodis, and Charles Willeford. I related to their tortured souls..."

I hope you're not feeling so tortured after you make your first million, Wil! But then I suppose your muse will have to work harder if you become, um, un-tortured?