We ran a poll in 2008 to find out which Prodigal Sons of Spade you were most eager to see return. These were the results:

I've been tossing around several new story ideas in my head. In the new poll you can help me decide what protagonist to go for.
Posted by jvdsteen at 5:05 AM 1 comment:

It is nearly the end of the year again… So it’s time to tell you what Sons of Spade thought was the best of 2008:

We hope to see a lot more from these talented writers in 2009!

From Sons of Spade to all you loyal visitors of this site: happy holidays!
Posted by jvdsteen at 4:13 AM No comments:

Ken does it again…. He tells us a story that is as much about a man and his place in the world as a crime story. In fact, the first part of it is mostly about how Jack Taylor tries to come to grips with the failures of the past and the guilt that haunts him. Also, he is our tour guide to the ever-changing, Irish city Galway.
As the story progresses however, we also see how he tries to solve a grisly murder (a crucifixion) and encounters true evil in the form of a young girl. Jack remains utterly hardboiled but also shows his compassionate side when he learns of the medical condition of his friend Ridge.
Every page a gem in some way or another, every line one to reminder, full of great quotes and a fantastic sense of place and atmosphere Ken Bruen again shows us why his work created all the buzz in the hardboiled community.
Posted by jvdsteen at 3:54 AM 1 comment:

A new Noah Milano short story by your humble host of this site went online on http://www.powderburnflash.com/
Check it out if you love your PI short stories!
Posted by jvdsteen at 2:47 AM 1 comment:

Q & A with Jeri Westerson 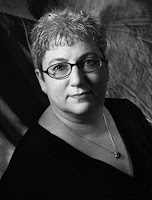 This time we interview Jeri Westerson, author of the medieval noir Veil of Lies.
Q: What makes Crispin different from other (unofficial) PIs?
Actually, he is official. I believe he is the first medieval private eye, specifically set up as a private detective, but calling himself the Tracker. He is also of the hard-boiled variety—definitely a son of Spade, since he is based on Sam Spade. That's why I styled my medieval mystery series as "medieval noir." He's a disgraced knight, exiled from court and all he has ever known. He restyles himself as a private detective, using his wiles and fighting skills to solve crimes and to follow his knightly code even though he can no longer be called a knight. It his his self-imposed penance to do this work on the mean streets of 14th century London.

Q: Why the medieval setting?
My interest has always been in the Middle Ages. I grew up in a household that revered history, particularly English history and that is the bent my imagination naturally took. We tend to think of the medieval period—well, any historical period, really—as somewhat romantic and exotic. A little distance by time can make a great deal of difference. It was a colorful period of raw power asserting itself; of sharply delineated levels of society; the costumes, the pageantry. But it is easy to be drawn in by the romance of it all and forget the harsh realities. I like to bring that back into focus for my novels, the dark grittiness of the era, with a little less focus on the pageantry and a little more on the middle and lower classes.

Q: How did you get published?
The old-fashioned way: through hard work and perseverance! I started out writing historical fiction. But it's a very tough market to crack and after writing my various novels for about ten years I was getting nowhere fast. Then a former agent suggested I switch to medieval mystery, as mystery/crime fiction was a bigger market. Once I changed gears and got involved in the mystery community, things started to turn around. But I didn't have any interest in writing the traditional medieval mystery. I wanted my own twist on the genre and chose to go darker and edgier. I wanted to cross-pollinate my interest in medieval history with my love of hard-boiled detective fiction, and it was then that "medieval noir" was born. But all told, it took me fourteen years to get published. I am the poster child for perseverance!

Q: What's next for you and Crispin?
Crispin returns in the Fall of 2009 in Serpent in the Thorns. The legendary Crown of Thorns is brought to England as a peace offering...or is it instead a French assassination plot against England's King Richard II? When Crispin becomes the prime suspect, he must find the true assassin before he falls prey to the king's justice.

Q: How do you promote your books?
I started with a website (www.JeriWesterson.com) and my blog "Getting Medieval" (www.jeriwesterson.typepad.com) which is a magazine of history, mystery, and rants and drabbles. Then I go to fan conventions like Bouchercon and Left Coast Crime and get myself onto panels. I give library talks and talks to gatherings as well as booksignings in bookstores. I'm happy to go just about anywhere to talk about the Middle Ages and my book. My book launch was a fabulous show with a couple of medieval knights sword-fighting on the sidewalks of Pasadena, with food, champagne, and medieval music. I don't guarantee that at every appearance, but I do bring my display of medieval weapons and helm.

Q: Do you have any favorite Sons of Spade yourself?
Crispin Guest, of course. And I was quite fond of Brother Cadfael, the first medieval sleuth, though he was an amateur sleuth, not a pro.

Q: In the last century we've seen new waves of PI writers, first influenced by Hammett, then Chandler, MacDonald, Parker, later Lehane. Who do you think will influence the coming generation and in what way?
Graphic novels are already influencing the culture through movies and video games. A lot of it seems to be going darker, so I'm on the crest with that one. I really like graphic novels and Japanese Manga. The illustrations are fabulous, whether realistic or stylized. I was a graphic artist for many years before I turned to writing novels, and I have a great appreciation for interesting renderings that tell a story (and I grew up loving comic books like Spider-Man and Creep Show. I wish I still had those!) Steampunk, too, is graphically interesting and has the flexibility to go dark or light.

Q: Steven Hague came up with the following question: If you had to choose to write in a genre other than crime, which one would it be and why?
Historical novels. But even though I never considered writing crime five years ago, I'm really enjoying it now. I get to indulge in playing with the various sharp weapons I am fond of (I own a broadsword and a few daggers), and I had never written a series before. To get the chance to revisit these characters again and again and delve deeper into their lives has been most interesting and a lot of fun.

Q: What question should we ask every PI writer we interview and what is your answer?
What sort of experience do you have that informs the subject you write about?

Well! I wanted the experience of stabbing with my dagger and using the sword on a body, but since volunteers are few for these endeavors, I utilized my local Costco (warehouse store chain) and bought myself the biggest slab of meat I could find. I nailed the sucker to the post of my son's swing set (when he wasn't home, of course) and indulged in a little backyard CSI. Hoping the neighbors weren't peering out their windows, I got my firsthand experience with getting medieval on someone. And it was great fun. And the body was easy to dispose of. We ate him!
Posted by jvdsteen at 2:22 AM 8 comments:

City of the Sun (Frank Behr) by David Levien

I read this one in two days. It was that good, I just couldn't put it down. In very direct prose David Levien (screenwriter of movies like Rounders) tells the story about Paul and his wife whose son is missing and of ex-cop Frank Behr. The plot doesn't offer any real surprises or isn't very original. After all we've read many PI-tales about missing children and seen many tough, divorced ex-cops with traumatized pasts like Frank Behr.
However, the pain of losing a child is described incredibly well without overdoing the drama. Read it and you will soon enough feel with Paul and his wife, the emotions and situations feeling very real.
Frank may not be an original but the spare prose of David really brings him alive.
The strength of this novel is in the characters and the hardboiled writing style.
If David would bring this one to the screen however I'm sure it would give movie-versions of Mystic River and Gone Baby Gone a run for its money.
Posted by jvdsteen at 5:55 AM 1 comment: