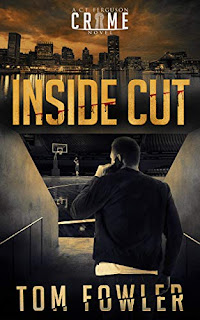 C.T. Ferguson is the star of quite a number of books now. The concept of a hacking PI that gets paid by his rich parents after a job well done is what got me interested in this series.
In this one Ferguson is hired by the mother of  a basketball star to find out if her son is throwing games under the influence of bad guys. The investigation leads into a kidnapping, forcing Ferguson to break the law, aided by his pals from both sides of the law.
As always, the tech used is very realistic, the fights are exciting and well written. There's also a pretty good car chase in this one. A bonus is the relationship between Ferguson and his lover, Gloria, which is growing with each novel.

Posted by jvdsteen at 3:02 AM No comments: 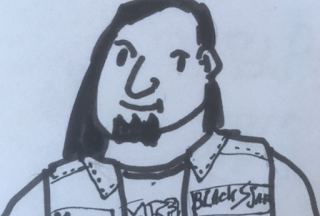 Lenny met up with Baby Jackson’s snitch in  a dive bar in the worst part of San Diego. Baby had described the man as an ugly dude with a red goatee and pockmarked face. It wasn’t difficult to find him. Not that most guys in the bar weren’t ugly. The snitch was the only one with a red goatee. He was sitting in  a booth in the back, nursing a large beer.
Lenny ordered a bottle of Corona at the bar and walked over to the snitch’s booth. According to Baby he was known by the name of Ugly Jim. That was obviously not one of those ironic nicknames, like tall dudes they call Tiny. Aside from a pockmarked face Jim was cross-eyed, had no eyebrows and huge ears. Lenny suddenly felt like he was Tom Cruise himself.
“Jim?” Lenny ventured as he neared the man’s booth.
“Lenny?”
“Yes.”
“Have a seat then.”
Lenny sat down. “Thanks for meeting me.”
“If there’s money to be had, Jim shows up.”
“Err… Good to hear that I guess. So yeah… Nice place here.”
Jim chuckled. “It’s a fucking shithole. But at least I’m not the ugliest guy around here.” Lenny thought that was up for debate in a big way but didn’t comment on that.
“At least they stock Corona,” Lenny said and toasted Jim’s mug of beer with his bottle.
“I only drink domestic myself. So, let’s get down to business. Jackson told me you need some intel on the gambling biz?”
“Yeah. Gambling on dogfights to be exact.”
Jim whistled. “Whoo-ee. That’s specific. You a gambling man, Lenny?”
“No, not at all. It’s this case I’m working on. A missing dog. I think it might have been dognapped by people involved with dogfights.”
“Yeah, Jackson mentioned you’re in the same business as she is, although not in the same league. So, what exactly do you want to know about that?”
“Well, I guess I want to look around at one of the fights. Get into contact with the organizers to see if I can find the dog.”
“You do understand that could get a bit dangerous, right? I mean… Those dogs are worth serious money to those dudes. They won’t exactly hand over the dog when you find it.”
“I’ll cross that bridge then. So, can you help me?”
“For two-hundred bucks I might.” Ugly Jim smiled an even uglier smile.
Lenny sighed. “Baby warned me you’re not cheap.”
“Fuck you, that’s a steal. I need to make a living, you know.”
“I ain’t got that kind of dough to pay you. A hundred I can do. Maybe some concert tickets to a band you like.”
Jim squinted. “You think you can get me some Five Finger Death Punch tickets?”
Lenny nodded. “I think I can. I know a dude who works with them. Used to roadie for him back in the day.”
“How do I know you’re not bullshitting me?”
“How do I know you’re not?”
Jim cackled. “Fuck me, Jackson turned you some shit, didn’t she?”
Lenny smiled. Then he got a hundred dollar bill from his battlejacket’s pocket. He put it on the table. Jim’s hand went to it, but Lenny’s hand covered it before the snitch could grab it.
“Not so fast, Jim. Tell me a bit more.”
“All right. Listen, there’s a dogfight coming up tomorrow night. Right here in merry San Diego. They rented an empty warehouse for that shit. You got the correct password and you can come in, twenty dollars cover charge.”
Slowly Lenny’s hand lifted a bit from the dollar bill. “Go on. Where is the warehouse?”
“Near Market Street.”
“What’s the password?”
“Promise me you won’t ever tell them I was the one who gave it to you.”
“One of the main skills a private investigator needs to have is knowing how to keep things confidential. I’ll keep my trap shut, Jimmy.”
Jim put a hand on the corner of the dollar bill. “It’s Scooby Doo.”
“Brilliant password,” Lenny said and allowed Jim to grab the money. It disappeared in Jim’s pocket like magic.
“But be careful, dude. If they find out you’re not there to gamble and watch the dogs fight they could get nasty on your ass.”
“I didn’t know you cared,” Lenny said.
“As long as I don’t have that Five Finger Death Punch ticket in my pocket I do.”
“You’re all heart, Jimmy,” Lenny said and drained his Corona.

Posted by jvdsteen at 5:25 AM No comments: 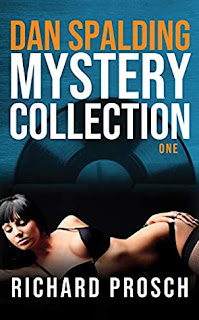 This is a lot of bang for your buck. Collecting three Dan Spalding mystery novels in one low-priced little ebook I had to snap this one up.
In the first of the stories collected ex-cop and record store owner Dan Spalding looks into the death of shoplifter and gets involved with the murder of an entertainer. In the second story he is hired to protect a college professor who is being threatened. The third tale (that I reviewed before when it came out first) has him help out a buddy who blackmails the wrong person.
These are fine tales. The fact Spalding owns a record store is fun as are the playlists added to the stories. Spalding is a pretty cool tough guy with his bike and leather jacket which adds a bit of a pulp flavor to the stories which I enjoyed. Add to that his interesting and sexy employee / girlfriend and their developing relationship and some nice and clean prose and you have an entertaining read on your hands.
Posted by jvdsteen at 8:03 AM No comments: 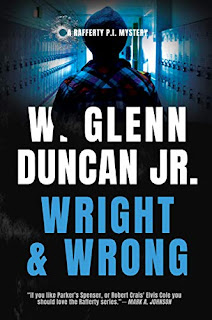 In the second book W. Glenn Duncan Jr. writes, following in the footsteps of his father we read how Rafferty gets involved with a high school shooting. When one of the shooters he himself witnessed ends up on life-support Rafferty doesn't really feel like proving that shooter was innocent. When he at last gets involved he will have to take on some very angry parents.
While Duncan Jr's feel of Rafferty and sidekicks Mimi and Cowboy is just excellent I did think the story is a bit thin and could have done with 40 less pages. Aside from that, most people who enjoyed the earlier tales or are into Spenser might be able to enjoy this as a charming and quick read. The prose is very readable and the dialogue quite snappy.
Posted by jvdsteen at 12:54 PM No comments:


Lenny Parker, PI / roadie / metalhead is back in a new serial, blending a bit of comedy with a hardboiled detective story, one feet into metal culture. This time he is hired to track down a missing dog. Read the other parts here.

Lenny met up with Baby Jackson at a local Starbucks. The other patrons, especially the male ones looked up from their Macbooks and iPhones when she walked in. Tall, athletic with a model’s cheekbones Baby cut an impressive figure. She was wearing tight jeans, a long leather jacket and wore her hair in cornrows as she always does.
She walked over to Lenny’s table. He handed her a cup of coffee. “I already have yours. Black, like you want it.”
“Good to know you remembered something from training with us.” She was referring to the time Lenny spent with Baby Jackson and her dad, Old Man Jackson to get his private investigator license.
“I seem to remember a very large part of my duties were supplying you with coffee and donuts,” Lenny said. He was having a big White Chocolate Mocha himself. He liked to treat himself to something sweet every now and then. Like daily.
Baby sat down. “So, spill. What do you need?”
“You’re hurting my feelings a bit. Maybe I just wanted to see you again. Chew the fact. Talk about your love life. Your health.”
“Who I fuck is none of your business. And you can see I’m in perfect health as always. Now cut the shit. We never meet socially.”
“All right, all right. Sheesh, I can see you’re a top investigator. Seeing through my lies like glass. Okay, I need some advice on a case I’m working on. It’s about dognapping.” Lenny filled her in while Baby listened patiently and drank her coffee.
When Lenny was finished she put down her coffee and leaned back a little. “Dognapping is more common than you might think. It hardly shows up on the news, but daily dogs are stolen from their owners. Sometimes they are stolen so they can get a ransom from the owners. Sometimes the dog is of a rare and expensive breed and they just sell them. And then there’s the whole dogfighting thing. They are either used then to fight or just train the fighters.”
“I was hoping dogfights were an urban myth or something. I heard about it on tour in Asia. But it’s a thing here in the United States?”
“Shit, Lenny… How can you still be such a naïve little shit. Yes, there’s such a thing. Fuck, it’s huge. There’s a considerable amount of money to be made gambling on thes fights. And where there’s money to be made, people are willing to commit atrocities.”
“Yeah, I guess. Well, since Mr. Janson never got any ransom amounts and Ozzy’s not a rare breed I’m afraid we’ll have to consider he is indeed in the hands of dogfighters.”
Baby nodded. “That sucks, I know. I like dogs better than people.”
“I’m not sure you actually like people at all.”
Baby shot him with her finger. “Bingo.”
Lenny chuckled. “You’re something else, Baby… So, do you have any experience with a case like this? Any idea how I could track down Ozzy?”
“Doesn’t he have a chip implanted? A lot of dogs these days have.”
“I guess not. Janson never mentioned it.”
“All right. Then you might have to look around the dogfighting circuit.”
“I wouldn’t know where to start or find anyone who knows anything about it.”
“I might know a guy who can help. A snitch who’s got a good knowledge about the local illegal gambling scene. If you want me to, I can set something up. I’m not sure if you current pay can cover your expenses though.”
“Damn, they can hardly cover this coffee. I like Mr. Janson and I just want to see him reunited with his dog. I’m not in this one for the money.”
“Fucking sap. I thought we taught you better. No pay, no case.”
Lenny shrugged. “What can I say? I’m a do-gooder.”
“You fucking are.”