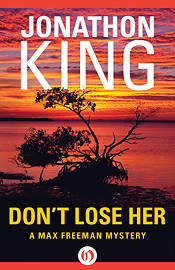 Max Freeman returns! Good thing too, because I enjoyed earlier books in this series.
In this one Max is asked by his buddy, lawyer Billy Manchester to look for his kidnapped wife, a pregnant judge. Sometimes aided by the FBI Max searches the Everglades for her.
This time not only Freeman's POV is used to tell the story, but also that of the judge and one of the kidnappers. While those POV changes might make the story a bit more interesting, it also took away some surprises for me and took up space I'd rather see used for some more action-scenes or twists. The ending seemed somewhat rushed to me as well.
All in all though, Max is a good character, the writing is tight and the atmosphere perfectly described.
Not the best in the series, but still pretty good.
Posted by jvdsteen at 7:36 AM 2 comments: