We're all lucky Open Road is now offering the John Cuddy series in ebook format so we can all enjoy this high-quality series again.


In this one John is hired to play bodyguard for a woman who wants to divorce her cruel husband. When the husband is found dead along with a hooker Cuddy is suspected of these killings. The PI is forced to investigate these deaths to prove his innocence.

Jeremiah Healy shows us how great the nineties PI's were with a great, intelligent plot, some non-gratuitous violence and great characters. What makes this one especially interesting in the way Cuddy decides to make some decisions that are quite morally ambiguous, showing us all a good PI should be interested in justice more than the law.

An example for everyone trying to write a good PI novel...

Anyone who's read James R. Tuck's Deacon Chalk urban fantasy series (and you should) know he's an expert in writing tough guys. It should be no surprise that he can't just write fantasy but is also a great crime writer. He was kind enough to give us the lowdown about his short story collection, Hired Gun.

Tell us what to expect from Hired Gun.
Hired Gun is a collection of six short crime stories. They are quick and deadly little tales set in Culvert City, a place where bad people do bad things to each other.

How long did it take you to write it?
Off and on stretched over a few months. Each story would come in a burst, get written in a short amount of time, then set aside while I worked on something else. After a bit of time away I would pick them up and revise them with fresh eyes.

Did it take a lot of research?
Not specific research. I have been a long time crime fiction fan and a gun fan so it all swirls in my head and comes out as stories.

Where did you come up with the plots; what inspired you? 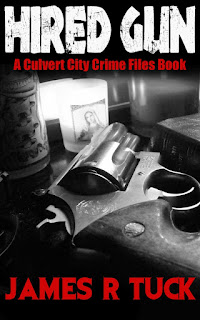 Most of them came to me from that soup of ideas in my head. I don't remember any specific sparks that set off any stories. They are scenes that came into my brain when I was looking the other way.
But the concept that started it all, the one that the nameless hitman is built around came from a song by the band Bride called "Hired Gun". It's a song about a hitman who uses the line "I hope you and Jesus have it all worked out." I loved that song as a teen and it really stuck with me. When watching Tim Burton's Batman and seeing the Joker ask "Have you ever danced with the devil in the pale moonlight?" I always thought back to that song and felt that it was so much cooler.

Which stories did you enjoy writing the most?
I really like the first story BIG TONY LIKES A SHOW. It really sets the tone for the collection. It's a nasty little tale with a sharp twist at the end and I am really proud of the snappy dialog I accomplished.

Who is your favorite among the characters in the collection?
I really like the nameless hitman that is the main character in this collection. He's the reason I put it together. He is featured in the majority of the stories, each on giving a different aspect of him and seeing him at different parts of his life. CANCERSTICK is him when he's kind of young and he still has some pep, the same character in TREATMENT is much darker, far more bitter and jaded.

Is there anything else you'd like to say about Hired Gun?
Thanks to everyone who buys it, I hope you enjoy the stories as much as I enjoyed writing them!

Posted by jvdsteen at 4:33 AM No comments:

I was worried we'd be without Sean O'Brien after it seemed Tom Lowe's publishing deal wasn't renewed. Luckily, Tom struck out on his own, self-publishing the third Sean O'Brien tale. 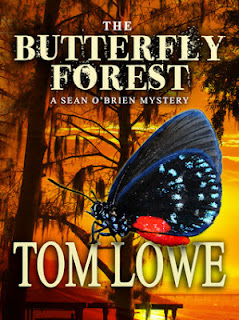 Sean is a Gulf War veteran and ex-cop living on a houseboat. When he rescues a mother and daughter from a killer he gets involved with pagan rituals and drug dealers.
There's some nice poetic passages involving butterflies and what they can represent. These scenes are countered by some action-packed passages that seem to come out of a Lee Child novel.
Sean is THE private eye, even if he isn't an official one. He's very, very tough and a great investigator. His feelings for his deceased wife is endearing and his sacrifices to protect the mother and child enforce his heroism. I long to see O'Brien return, just because he has all the qualities I need in a fictional hero.
It's an entertaning, well-written novel. The only qualm I have is with the page count. The second O'Brien novel was a bit shorter and that made it pack more of a punch. Now some plots seemed to be drawn out a bit too long.
Posted by jvdsteen at 12:07 PM No comments:

Background Check on The Storm With

I've been a fan  Tony Black for a long time and he's been following my work just as long. It's always a pleasure to interview him. This time he gave me the lowdown on his new novella, The Storm Without.

Tell us what the novella is about.

Doug Michie has been booted out the force after a particularly harrowing case and goes home to Ayr - on Scotland's west-coast - to lick his wounds. He's grown up there but been away for nearly 20 years; when he returns, he hooks up with ex-school-days flame Lyn whose son has been arrested for the murder of his girlfriend. Doug senses all is not as it appears to be and digs into the case, with some unexpected consequences for himself.

How long did it take you to write the novella?
34 weeks. How's that for an exact answer? ... It was originally serialised in a newspaper over here and it ran to 34 weekly installments so that's how I know.

Did it take a lot of research?
There was a fair amount of research into the history of Ayr and the up-to-date topography. I used to live there - like Doug - but only just moved back. My protagonist is a bit of a fan of the poet Robert Burns, who came from Ayr too, so I had to do a little bit of research into the Burns elements in the story.

Where did you come up with the plot; what inspired you?
The original idea was to write a homecoming novel and a small-town noir, once I knew it was going to feature a PI the plot kind of grew from there.

Which scenes did you enjoy writing the most?
The opening scene is a big sweeping description of the road into the town, with some of Doug's foreboding about going back - that seems to stick for some reason.

Who is your favorite among the characters in the novella?
My protagonist Doug is an interesting bloke - he's clearly seen to much in the force in Northern Ireland and he wants to forget. He aligns himself with the philosophy of Burns too and that's interesting to me because I'm a fan of the poet myself.

Is there anything else you'd like to say about the novella?
It's my first title available through Blasted Heath as an eBook and ridiculously cheap on Amazon!

A Cup Full Of Midnight (Jared McKean) by Jaden Terrell 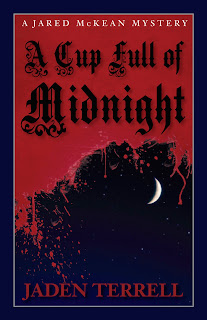 There's a reason I invited Jaden into the Hardboiled Collective of course... From her debut novel I knew she was going to be a force to be reckoned with in the PI genre. With this second novel she proves it again.
Jared McKean, ex-cop and Nashville PI investigates the murder of an evil goth, Razor, to prove his nephew didn't do it. There's also a few subplots, one including Jared's housemate who takes a dying friend with AIDS in his home.
Jared's investigations takes us to dark places and happenings in a community of wannabe-vampires. This is really hardboiled stuff but enriched with a female's touch in the tender scenes with McKean's nephew and friends.
In a particularly nasty fight McKean shows us how tough he is and how strong his sense of justice is. A guy this tough is bound to turn up in a third novel and I will be eagerly awaiting it.
Posted by jvdsteen at 6:19 AM 1 comment: