A Hell Within (Griffin & Price) by James A. Moore and Charles R. Rutledge 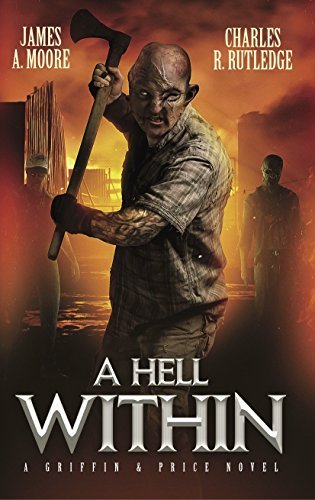 I stay away from sci-fi / PI mash-ups or paranormal romance / urban fantasy featuring PI's. I do have a soft spot for true occult detectives though.
Sheriff Carl Price and ex-mercenary, now PI, Wade Griffin get involved with some pretty dark forces in the town of Wellman. Luckily they're pretty tough guys and get some help from occult detective Carter Decamp.
There's lots of Easter eggs here for occult detective fans. Wellman is obviously named for the creater of several occult detectives, Manly Wade Wellman. And Wade Griffin of course as well. Decamp probably owes his name to L. Sprague Decamp, author of some cool Conan books.
Anyway, this is a lively mix of a PI story and a fantasy / horror story. The creatures are pretty cool, there's a lot fo fast-paced action and the characters are very cool. This probably would do great as a comic book as well.
All in all, I loved the ride.
Posted by jvdsteen at 12:40 PM No comments:

Dan Reno takes some time off from the PI agency where he works to investigate the death of a tycoon's son who gets killed just before his wedding.
His investigations take him from the cold Sierras to the hot Nevada desert as he takes on a bunch of crooked cops.
There's not much news to this novel, but some stuff stands out. I've read a lot about PI's who talk to hookers in investigations but it's not often they sleep with him. Reno had a bit of a booze problem, but is not a real recovering alcoholic. He started out as a cop, became a bounty hunter, then a PI.
The ride is enjoyable enough, though I didn't care too much for the basic plot. Still, I'm going to read a few others in this series to see if the flaws get better because I see some promise in Dan Reno.
Posted by jvdsteen at 11:05 AM No comments: