He's not really a PI but a hitman. Still, in this novel of the series he does some investigating. Hired to put a hit on the hitman who intends to kill a dance instructor he also tries to find out who hired this hitman in the first place.
During this investigation he has sex with women of various ages and kills some people without any remorse. This is pure pulp, and I love it. It's pretty amazing how Mr. Collins can write about a cool and calculated killer who can think with his dick a bit too much and has no second thoughts about killing someone in cold blood and still make you like him in a way.
Pure, hardboiled fun. The influence of his Mr. Collins' idol Mickey Spillane is clear throughout this enjoyable crime story.
Posted by jvdsteen at 7:31 AM No comments: 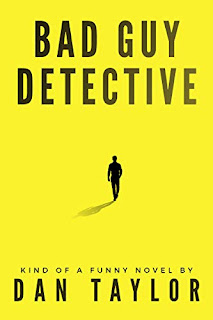 Private investigator Jake Hancock is hired to find out who the biological father of an actress is. As he does there seems to be some kind of mutual attraction going on, making for some fun scenes. The mystery behind the father is pretty surprising. Well, not to me as I figured it out. But still...
I'm not quite sure what I think of this one. I like the main character because he's a bit of an anti-hero (using drugs, being an asshole to women etc) which is fun. I like how he works for Hollywood stars as some kind of fixer. The dialogue is fun and the writing the way I like it, leaving out stuff people skip. The writer wrote something about it here and I totally agree, it's how I write.
However, I do think that although the mystery is nice enough I could have used a bit more danger posed to Jake or his friends. There is some danger involved near the end though, which reads like the ending of a Netflix episode. That's something I didn't like either. I like it when a book is really more standalone in a series.
So, I will be reading the second in the series to see if the story gets better. The writing and PI are enjoyable enough to give it a chance.

Posted by jvdsteen at 7:49 AM No comments:

Sins of the Sons (Keeper Marconi) by Vincent Zandri 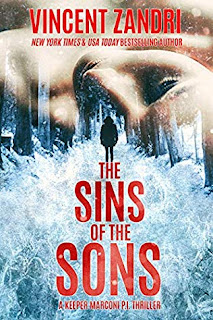 What would happen if Spenser was written by Mickey Spillane instead of Robert B. Parker? That's kind of the feeling I had with this book.
Jack "Keeper" Marconi, former jailer and now PI is hired to prevent the old childhood friend of his new client to rat him out about a dark incident from their past. You see, they were involved with the death of a lawyer when they were young. When Marconi is asked by the cops to look into the case as well things heat up.
Aided by big and hunky black ex-con Blood (can you say Hawk?) he sleeps with an older woman, falls in love with a younger one and investigates the case until all secrets are uncovered.
There's a roughness to Marconi that reminds you of the old hardboiled days. However, in the use of technology it is clearly situated in the now.
It's pretty much an enjoyable story and although they reminded me a bit too much of Spenser and Hawk or Hardman and Hump main characters Marconi and Blood are entertaining guys.
I was expecting a bit more hardboiled fistfights and shootings though to spice things up, especially with the whole old pulp style.
Posted by jvdsteen at 7:39 AM No comments: