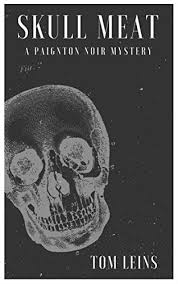 This is a pretty dark novelette. Joe Rey is a PI in Paignton who really is more of a thug / fixer. We follow him kicking the crap out of people and wielding a pigknife. There is no honest or nice person in the book and that includes Joe. The prose is very fast and to the point, which I absolutely loved. The violence plays out in your mind very vividly without spending a huge amount of description, not an easy feat.
I must admit I sometimes got lost in the plot, the chapters almost a series of short stories.
All in all I liked the writing style but wasn't 100% sure I liked the plot. Eager to read more though.
Posted by jvdsteen at 5:53 AM 1 comment:

Down & Out: The Magazine Volume 1, Issue 1 - edited by Rick Ollerman 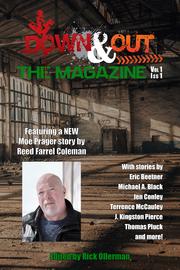 Lately I've been reading a LOT of books from publisher Down & Out. They have been responsible for the return of old favorite PI's like Nick Polo and have been publishing work by favorite writers like Dana King, Steve Lauden and many others. When they announced a digest magazine I was excited as hell, especially once I learned one of my favorite writers (and nicest ones as well) Reed Farrel Coleman would be contributing an original Moe Prager story. But there's more goodness besides that!
The magazine starts out with a punchy Ron Shade tale by Michael Black. Ron Shade is a personal favorite of mine who I haven't seen in action for way too long so that was a treat right away.
Then editor Rick Ollerman serves up a PI tale with a surprising POV. Terrence McCauley writes a dark espionage tale . Eric Beetner writes a prequal of sorts to one of his crime novels while Thomas Pluck does what he does best with his dark crime story featuring everyday men. And of course Jen Conley shows that she can write really believable and moving characters with her story.
An article pays tribute to great pulp writer Frederick Nebel, reprinting one of his stories as well.
Those stories alone would make this a very good magazine. Add to this mix the dark and moving Moe Prager story that deals with concentration camp survivors and you just have the best crime fiction magazine since Black Mask.
Posted by jvdsteen at 11:47 AM No comments: 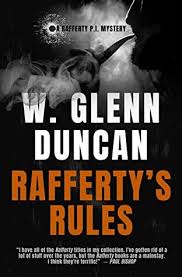 This book was first published in the late eighties. Rafferty can be seen as a Texas version of Spenser. He's got a slightly psycho sidekick, a significant other who can be both cute and annoying, knows his wisecracks and has his own rules and sense of honor. As a huge fan of Spenser I don't see those things as bad. In fact, I cannot deny my own Noah Milano series owes a lot to Spenser.
With the news that the author's son will be writing a new Rafferty story it makes sense this series is reissued.
In this first book in the series Rafferty tracks down the biker gang that raped the daughter of a wealthy family.  What follows is not a challenging mystery nor a dark character study. What does follow is one heck of an action-packed and fun ride! I loved Rafferty's rules, his wisecracks, the great pacing and action scenes.
I will be reading the rest of the series for sure and very eagerly await Duncan Jr's first Rafferty novel
Posted by jvdsteen at 11:22 AM No comments:

The Lost Ones (Nora Watts) 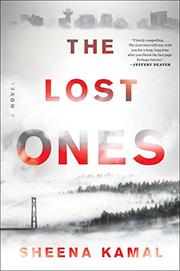 This one got quite some praise, comparing it to the best Scandinavian Noir while it comes from Canada. Not sure why those comparisons, because it's just as much an American hardboiled detective / noir story. Maybe it's the fact the protagonist is a broken rape victim/survivor like Lisbeth Salander?
Nora Watts used to be in the Army, was raped and birthed a daughter from that traumatic event. She had the baby adopted, not ready to take care of a kid then.
As the novel starts we find her working as a researcher for a PI firm. She gets hired by the people who adopted her child to find her. Yes, her own daughter ends up missing. When she investigates she ends crawling back into the bottle she swore off and basically goed down the deep end, however never stopping to look for the girl. When a link is discovered between the rape and the fact her child is missing things get even more personal and dark.
This is not a light novel. While the first hundred or so pages read like just a nice take on the female PI story what follows is a very dark and sometimes depressing story. It sometimes hurt to see Nora alone, hurt and drunk. That's good writing there!
Yep, this one will be nabbing the Shamus this year and other awards for sure. A literary but absolutely hardboiled detective story that will be sure to win over all critics.
Posted by jvdsteen at 11:27 AM No comments: 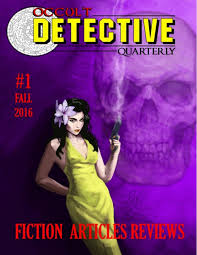 As much as I love the PI genre I have a soft spot for the occult investigator, a nice mix of the PI genre and horror.  This magazine presents a lot of great stuff with and about these monsterhunters. I was quite surprised I liked the story with an occult investigator / gorilla so much. It sounds outlandish, but it worked. I'm a big fan of the Royal Occultist, so I was happy to see another story with him appear. I was intrigued by "The Baron of Bourbon Street" which managed to find an original use for voodoo deity Baron Samedi.
On the non-fiction front there's an interesting article about comic's occult investigator Dr. Spektor and one about writing Victorian occult investigators.
All this and some cool illustrations too! A must for fans of this genre!
Posted by jvdsteen at 6:43 AM No comments: