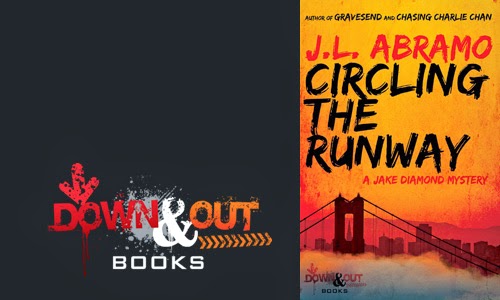 JL Abramo is back with a new novel featuring Jake Diamond (Circling The Runway) after quite some years... I was eager to find out about it...

Tell us what the novel is about.
Circling the Runway is about how the personal greed of one man can impact the lives of so many others, about how common cause can make for unlikely partnerships, about how long trust can outweigh suspicion, and about 260 pages.

How long did it take you to write the novel?
Usually when I get started, with an opening scene I find intriguing and hope will capture the reader’s attention, it goes very quickly out of the gate.  But since I never know how it will end when I begin, I eventually reach what I would call a turning point.  When I finally decide where I want the story to ultimately arrive, and realize I can’t get there from here, I usually need to backtrack to find the path I need—and that can be time consuming.  Generally, a Jake Diamond mystery will take at least six months of writing and editing before I feel it is ready to show my publisher.  This book took a bit longer because I was bringing Jake and his gang back after a hiatus of nearly a decade, and I needed to become reacquainted with Diamond, Darlene, Vinnie, Joey and the other North Beach regulars.

Did it take a lot of research?
Jake Diamond turns forty in Catching Water in a Net, which appeared in 2001.  Clutching at Straws and Counting to Infinity soon followed.  I made a decision in writing the new book.  I chose to keep Jake and his sidekicks from aging too quickly.  Therefore, I set the novel in 2004.  This required researching the cultural period—films, music, sports, and politics of the time.  San Francisco and Los Angeles are familiar ground by now, but I had to do a lot of research on Oakland, where much of the action takes place.

Where did you come up with the plot; what inspired you?
The idea from the start was to have a series regular—a well liked and respected police lieutenant—act very suspiciously with regard to a murder which kicks off the story.  And then have her partner, Sergeant Johnson, so concerned he is forced to turn to Jake Diamond for help—and Diamond and Johnson have not shared an amiable history.  Inspiration?  I think it developed from considering classic duos and their varied dynamics—Liston and Ali, Holmes and Watson, Frollo and Quasimodo, Felix and Oscar.

Which scenes did you enjoy writing the most?
I always particularly enjoy the interactions between Jake Diamond and his associate Darlene Roman—who keeps Jake honest and keeps the business afloat.  Developing their relationship and their special rapport over the course of the series has been great fun—and, from what I hear, keeps readers guessing about where it may lead.

I can do no better than to provide an example.

Judging by the sound that woke me, I expected to find myself sitting beside Quasimodo atop the cathedral tower; him pulling the rope with one hand and punching me in the side of my head with the other.  Another peel of the deafening bell and another sock in the ear and then another.  When it happened the fifth time, I realized at last it was the telephone.  I struggled to grab the receiver and hit the talk button; it reduced the buzzing in my head by fifty per cent.
“Jake.”
“Darlene?”
“Since when does my name have five syllables?”
“Give me a break, Darlene. I’m not doing very well.”
“I’ll say. I’ve heard myna birds with better diction.”
“Did you call this early to torture me?”
“I called this early because Joey tried calling you and when he couldn’t reach you he called me.”
“I was outside smoking and must have missed the call.”
“Well, I was having a very pleasant dream featuring Hugh Jackman.”
“What’s so special about Hugh Jackman?”
“You’ll never know until you see the X-Men movies.”
“And what is it with grown women dreaming about movie stars?”
“It’s probably a bit like a World War Two G.I. keeping a photo of Betty Grable in his locker; or like the picture of Rachel Weisz you keep in your wallet.  Are you going to ask why Joey called, or do you want to continue trying to beat the subject of idol worship to death?”
“Why did Joey call?” I asked.
“Tony Carlucci called Joey so Joey called you.”
“I’m having some difficulty putting the two actions together.”
“The way you’re slurring your words makes me wonder if you could manage to put your two hands together,” Darlene said, without a hint of sarcasm. “Call Joey.”
“Are you going back to sleep?”
“Too late for that, Hugh’s gone.  I may as well go for my morning run and get ready to go to the office.  Pay some bills, stare at a silent telephone, and calculate the odds that you will show up there before noon.  Call Joey.”
The line went dead.

Who is your favorite among the characters in the novel?
Aside from Jake, who is like a stepbrother to me, it would have to be Darlene.  She is the perfect foil for Diamond.  Darlene can match wits, be as smartly humorous, set Jake straight, cover his back, challenge him to show his good side, and prove that with all of his faults Jake Diamond is at the end of the day an admirable character.

Is there anything else you'd like to say about the novel?
It was both challenging and rewarding to resurrect Jake and the recurring cast after so long.  It was truly like a reunion with old friends.  I hope it will please and satisfy the many fans who have been asking for ten years if and when the gang would return. 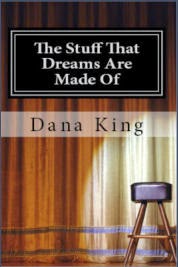 Dana King sure knows how to start a novel. The violent opening shows us very clearly that his Nick Forte is one tough customer. He has plenty of opportunity during the course of this novel which seemed just a tad more action-packed than the first one (A Small Sacrifice).
Hired to bodyguard an actor who is quite an annoying pig Forte ends up hunting for the Maltese Falcon! That's one Macguffin that is appropiate to a PI story, right?
King really knows his hardboiled prose. I really enjoyed the lean and mean writing style and the great use of Chandlerisms that never got stupid, annoying or forced.
Forte might not be the most original of the PI's but he is sure as hell one of the most satisfying ones.
Solid PI stuff.
Posted by jvdsteen at 2:32 PM No comments:

A Scourge of Vipers (Liam Mulligan) by Bruce DeSilva 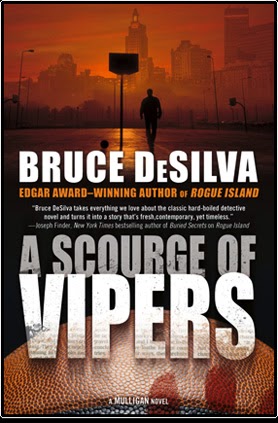 This one reads as a real turning point in the Mulligan series. Looks like Bruce DeSilva really knows how to keep a series fresh.
When the governor wants to legalize sports betting events start that end up getting reporter Liam Mulligan involved with a murder investigation and a missing briefcase full of cash.
What is really more interesting in this novel are the subplots. Like Mulligan dating a black woman and how that works in today's society. Like the fate of the dying newspapers. Or how Mulligan gets a chance at a new beginning, as both PI and reporter, making sure there's bound to be more great novels.
There's some thought provoking scenes in this one. Both about politics and racism. And DeSilva manages to wrap all of that up neatly in a story about a cool, wisecracking detective. This is what hardboiled fiction is all about.
Posted by jvdsteen at 2:20 PM No comments: 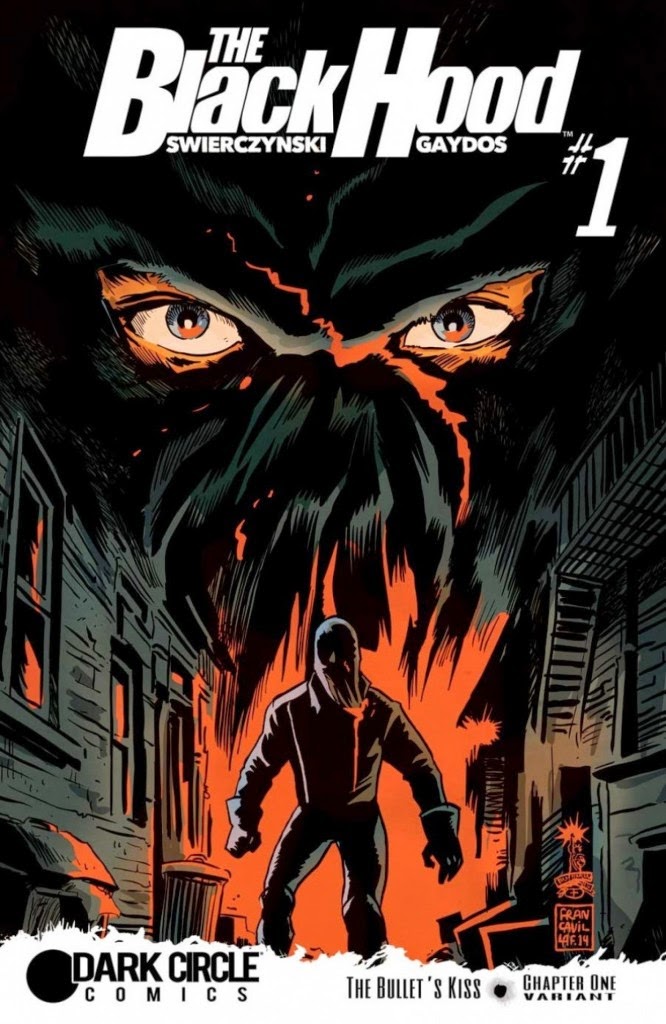 Me, reviewing a comic on this blog? Yep! Why? Well writer Duane has been writing some awesome crime fiction and I am a fan of  Alex Segura's work who is the brain behind the whole Dark Circle line this comic is a part of, so why not. And this Black Hood guy is one hardboiled guy...
Philly cop Greg Hettinger is shot in the face as he takes down a vigilante killer. That makes him a hero, but also a scarred and disfigured man who plunges deeper and deeper into depression. In the end he pulls on the hood of The Black Hood which ends this origin issue.
The story of Hettinger is told at a brisk space and could have been a novel by Duane by itself. The dark, gritty art perfectly enhances the story and has me wanting more.

Former DEA contractor Jonathan Cantrell is now a fixit man for a big law firm, his ex Piper is working for the cops. At first glance live seems to be good for both, but as the story progresses we see that is not really the case.
Jon is asked to track down a missing boy but ends up tangling with a vigilante killer. Aside from Jon's story there's the story of Deputy Chief Raul Delgado who has lived an interesting life that is really important to the story and possibly outshines Jon's plotline. Sometimes it even seems there's two books in one, but it really all makes sense in the end.
What I really enjoyed in this one was the fact that Harry Hunsicker really outdoes himself with the hardboiled prose in this one. It really, really reads very tough and hardboiled, like listening to a good blues album. I also liked the fact that this was more of a crime novel than the first one in the series that seemed to be more of an action thriller.

The most original PI of the decade, Frank Boff teams up with the most flawed, toughest female investigator of the decade as suspended, hard-drinking cop Emily Lynch debuts. They make a deal: Frank helps her with her murder investigation, she helps him with a missing person investigation. When the cases collide there is hell to pay!
The introduction of Emily Lynch really makes the plot more exciting. There's some very great lines from this politically incorrect character that had me chuckling quite a few times.
I wasn't sure about the ending though. It seems Boff might be moving away from the Dark Side more and more, which I thought made the character so cool and interesting.
Anyway, another great entry in the Boff series. If you want to know a bit more and aren't sure if my word is good enough you can pick up a free copy of the first one in the series here for 2 days.
Posted by jvdsteen at 12:04 PM 1 comment: