Q & A with Gerry Boyle 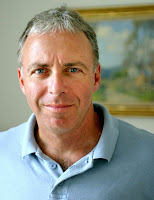 We interview Gerry Boyle, author of the Jack McMorrow and Brandon Blake novels.
Q: What makes Jack McMorrow different from other (unofficial) PIs?
McMorrow is a journalist and I always say that being a reporter is like being a cop except you don't need a warrant. Jack's "investigations" grow from his research for stories and his stories usually are driven by his innate curiosity. Like most reporters, McMorrow is nosy, and his job lets him follows his nose into anything that piques his interest. A woman in court abused by her boyfriend? What is she really all about? A bunch of marijuana growers? What is it like to be them? A woman working as an escort in a small town? What would compel her to do that? Who is she, reallly?
Of course, all of these inquiries lead to serious trouble. And that's where McMorrow's skills go beyond journalism.

Q: How did you come up with the character?
I was a reporter doing a lot of crime-related stories. I also aspired, at the time, to work for the New York Times. I invented a character who had been at the Times but was thrust into the world I inhabited: rural Maine, tough and dreary mill towns, small cities, closed communities where outsiders aren't welcome. McMorrow is the quintessential reporter: uncompromising, willing to do anything to get to the truth behind the story. He is in some ways the reporter I aspired to be. And he can take and throw a punch.

Q: What's next for you and McMorrow?
I'm working on the second Brandon Blake novel right now, and then Jack will be back. I'm mulling several ideas. I'm reluctant to say much more except that I'm intrigued by the idea of the criminal among us, the crime committed in a close community by one of its members—who remains in the fold, undetected. I'm very interested in the notion of trust and what happens when it's taken away. There have been murders in very small towns in northern Maine that could only have been committed by someone close to (but not domestically connected to) the victim. I like the idea that we think we know people but are occasionally violently reminded that all of us have interior lives, and some of them are very dark.

Q: How much of your work is inspired by your daily life?
Most of it. When I was reporting, I worked in all of the areas explored by my books. I don't work for newspapers anymore but I read them, watch the news, and some stories stick with me. And in my travels, I'm always thinking: what would Jack McMorrow say to that? What would he do if he were here. You know those plastic bracelets like the Lance Armstrong thing? I've thought of getting some made that just have the letters: WWJMD? (What would Jack McMorrow do?)

Q: Tell us a little about how you came to switch publishers?
They stopped liking my plot ideas. I wanted a place where I could write what I want (within reason). I know. Short answer.

Q: What's your idea about the psychotic sidekick in PI novels like Hawk and Mouse?
Is Hawk psychotic? I think maybe he's a little socio-pathic, not affected by the violence that appears to be his stock in trade. But in any event, I think PI's need sidekicks to provide both muscle and counsel. Hawk is Spenser's backup but his presence also forces Spenser to confront moral questions: Do we kill this bad guy? Do we break this guy's legs? If not, why not? Lethal sidekicks, like the ex-Marine commando Clair in my books, force our heroes to continually define and exercise their moral code.
In my books, Clair also is the sage, the philosopher (albeit heavily armed and stealthy) who probes the larger questions raised. Is war a necessary evil? Can killing be justified? How do we live with our actions? Remember, each book should leave our PI somewhat scarred and changed. It bugs me when characters traipse through a bunch of books and emerge unscathed, physically or emotionally. Life takes its toll. The lives described in these books should take its toll, too.

Q: In the last century we've seen new waves of PI writers, first influenced by Hammett, then Chandler, MacDonald, Parker, later Lehane. Who do you think will influence the coming generation and in what way?
I think a lot about attention spans, reading habits, ways we consume art and literature and stories. Of course, it's all evolving as we speak. iPads, Kindles, downloads, YouTube. With all of this technogical innovation, we've become much more visually oriented, and we expect immediate access. What does this have to do with PI writers? I think future PI novelists will be influenced by and drawn to writers whose work is cinematic, vivid, and immediate. I think of this as the Ken Bruen school of crime writing (with Elmore Leonard as an early example, Stuart Neville as a very recent one). The spare prose and jagged dialogue puts you inside the characters' heads and, more importantly, keeps you there for the whole ride. In the future, I think readers will expect this sort of transparency.

Q: Zoe Sharp came up with the following question: 'Conflict and pressure are two vital elements of any page-turning crime thriller. What do you do as a writer to put your characters under pressure, without stooping to cliche or contrivance?
I put my characters under pressure by forcing them to make difficult choices, to choose between opposing but compelling forces. For example, Brandon Blake, in the Port City series, has fallen in love with a young writer named Mia. But he becomes a rookie cop (realizing a longterm dream) and conflict follows. When he become suspicious of a couple of her exotic friends, does he run to NCIC and run their names? Does Mia stay with him when it seems like all of his friends are going to be cops? Does he go to parties like most 23-year-olds? Does Mia accept the fact that her boyfriend carries a gun, even off duty? Does she hold onto the small part of him that seems to be left, when the job takes over most of his life? Does Brandon try to tell her what it's really like to shoot a man dead? Or does he swallow hard and keep it all inside?
I don't think we need to stoop to cliche or contrivance to put characters in pressure-packed situations. Real life is filled with conflict and pressure. Our characters just have both ratcheted up by circumstances and their investigative inclinations.


Q: What question should we ask every PI writer we interview and what is your answer?
Q: Why write these books? Why not write "literary novels" or poetry or travelogues or memoirs? What is it that draws you to this genre?
When I was a reporter, I was fascinated by people who do not, cannot, will not, follow the rules. Often they are smart, charming, talented. And yet, they commit crimes. Murder, extortion, theft (grand and otherwise), assault.
What is in their makeup that is different from the law-abiding majority? Why them and not me? Why am I on the outside of the cell looking in?
I also was drawn to a genre that provides justice, something that is elusive in real life. We invent bad guys, but place them in a fictional world where most of the time, some of the time, they're punished. Good prevails. Evil is vanquished. Of course, some of the most evil characters live to fight another day.
And lastly, I fell into the clutches of literary suspense. I think I was a kid reading very early Dick Francis, found on my father's bedside table. Something about that hook that sets, the rush that leads you from chapter to chapter, the feeling that you must read to the end and you must do it now. If I can write something that makes you ignore the rest of your life for a few hours, it's a good thing.
Posted by jvdsteen at 12:55 AM No comments: 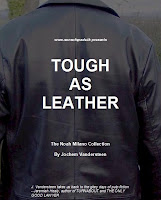 As a special treat to the loyal visitors of this site and to introduce as many of you as possible I've decided to make available for FREE the Noah Milano short story collection: "Tough As Leather" featuring introductions by fan favorite authors like Les Roberts, Jeremiah Healey, Ace Atkins, Sean Chercover and Mark Coggins.
Read how the son of a mobster tries to make an honest living as a security specialist but time and time finds out it's not easy to keep your hands clean when you're dealing with the most evil bastards of L.A.

All you have to do is e-mail me at: jvdsteen@hotmail.com,put ''free tough as leather'' in the subject and give me your e-mail address so I can e-mail you the copy. It is in pdf-format.
Posted by jvdsteen at 7:56 AM No comments:

The best thing this PI-novel has going for it is the interesting background of the main protagonist. Not the usual ex-cop or soldier, Willis Gidney used to be a con-man and in Youth Centers where he learned to take of himself until he was adopted by a cop.
In this first outing he goes out to look for the missing daughter of a friend. Meanwhile he falls for a female computer nerd and every now and then has to show he's been made a tough guy in the Youth Centers. Actually, the main storyline isn't that exciting but the interesting background of Gidney makes it an enjoyable read.
If the next book gives us a more interesting investigation and a higher level of danger it will be a winner!
Posted by jvdsteen at 7:49 AM No comments:

Hardnosed reporter Jack McMorrow is back!
His wife, a social worker, is threatened by a Satanist whose children she wants to take away. There's also a callgirl who has some dark secrets and is the subject of one of Jack's articles, much to his wife's dismay.
The beauty of this novel is the fact Jack is a married man with a kid, making him a very ''real'' kind of character and a nice departure from the standard lone wolf type of detectives. Not that he's not hardboiled. He's willing to do whatever it takes to keep his family safe.
The writing is very nice and direct, more or less in the Robert B. Parker style, making it a fast and easy read. I'm looking forward to Jack's return!
Posted by jvdsteen at 4:38 AM No comments: