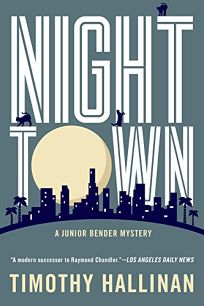 Two things set this series apart for me. One is the original idea of a burglar working PI jobs for other criminals. The other is some of the colorful characters populating it. Number one of these characters is the hitwoman that carries a pink gun, Eaglet. She steals every scene she is in with her strange combination of killer toughness and girly tenderness.
When Junior Bender breaks into to steal a valuable doll he ends up investigating the murder of a fellow burglar he has a soft spot for. Things get a little bit literary when it turns out there's an autographed copy of The Adventures of Sherlock Holmes involved.
While I thought some scenes moved a bit slow Timothy Hallinan excels in writing witty characters and he is to be lauded to put a literary spin on a pulpy premise so this book will be enjoyed by hardcore PI fans and the more mainstream mystery fans as well.
But hey, I tell you... The scenes with Eaglet are worth buying this book alone.
Posted by jvdsteen at 6:55 AM 1 comment:

Lenny Parker, PI / roadie / metalhead is back in a new serial, every new part starting with a metal video. He’s my slightly more humorous version of the PI. He doesn’t exactly know what he’s doing and sure as hell isn’t the martial arts master my Noah Milano is. In the first episode of this new story he was hired to track down the girl who robbed an old buddy of his lottery ticket. See previous parts here.
This time the video is Slipknot's People = Shit but with a very different video. It will make sense when you read this episode.

“What the hell happened to you?” Casey asked Lenny as he walked into her apartment. “You didn’t go into a moshpit again, did you? You’re getting too old and slow for that shit.”

“I ran into a fist leaving a bar,” Lenny told her, wiping some blood from his nose.

“Shit, sit down. Let me clean that up a bit,” Casey said.

Lenny sat down on the ratty couch in her apartment. There wasn’t much furniture but the walls were covered with old concert flyers. Casey used to go to nursing school before dropping out so she seemed to be the best person to visit after his little encounter at the Tower Club.

Casey wet a cloth and washed his face with a tenderness he really hadn’t seen her exhibit before. As she did he told her exactly what happened.

“Leave it up to you to get beaten up within hours after taking on a case. Philip Marlowe has nothing on you.

“If only I was as good an investigator. Or as witty,” Lenny said and winced when the cloth hit a painful part of his nose.

“Right. You’re lucky. Nothing broken. Won’t even need stitches. Must hurt like hell, though. Let me give you some medicine,” Casey said and offered him a bottle of Jack.

Lenny took a long pull, making an aaaah sound as the booze made the familiar slightly burning but pleasant sensations it does.

“Let me put on a band-aid on that snozzle of yours. I only have My Little Pony ones left. Hope you don’t mind.”

Lenny shrugged. “Doesn’t matter. We haven’t got any gigs lined up in the next few weeks anyway.”

“True. First time you seem happy about that. So, now what? Are you continuing your investigation or do you choose to keep your teeth?”

“Hey, you should see the other guy. I won the fight. So yeah, I’m continuing my investigation. What kind of private eye would I be when I dropped the case as soon as some dude gets a bit physical.”

Casey chuckled. “You don’t look like you were the winner of the fight.”

“What do you know about fights, you’re a girl?”

That wasn’t Lenny’s smartest choice of words. Casey pinched his nose, causing him to go down on his knees, howling in pain.

“I’m a fucking woman, Lenny. Not a girl. And you know I know all about fights,” Casey said.

“Take another one from the bottle to take care of that pain,” Casey offered.

“I can’t. I’m driving. And imagine that bartender calls that Janey is there. I will have to get behind the wheel right away.”

“Well, it’s not legal already now.” Casey put the bottle against Lenny’s mouth. “Now drink your medicine, I will drive you when it’s needed.”

Lenny had to drink or drown, some whiskey running down his goatee.

As Casey removed the bottle he said, “Thanks. I guess.”

“I’m your pal, Lenny. You know that. You just have to learn to watch your mouth.”

“But wait, you had a few drinks after our show. Are you allowed to drive?”

“I can handle my liquor better than you, tubby. You know that.”

That’s when the openings riff of Black Sabbath’s Iron Man played, Lenny’s ringtone. He answered it.

“She’s there. Great. Buy her a drink on me. I’m coming over right away,” Lenny said in the phone. He disconnected and told Casey, “I’m in luck. Janey showed up at the Tower Club already.”

“Awesome, let’s roll then,” Casey said. “Give me your keys.”

So a few minutes later they were driving. Lenny prayed no cops would have them stop over, because he had to admit Casey was driving okay, but he figured legally she still had too many an alcohol percentage in her blood for sure.

Casey told him as she was driving and he was shotgun he had to shut his mouth and let her choose the music. Some screaming punkrock girl was shouting about Cosmic Bullshit through his speakers. Not his thing.

Before the third song had set in they were already at the Tower Club. Casey parked the car pretty neatly and they got out.

When they walked in the room, KISS singing about their Love Gun they spotted her right away. She was dancing all by herself, more sensual than any stripper. Short, leather skirt. White tank top. Tattoos of geisha’s, dragons and koi fish all over her slender arms. Lipstick red as blood. Almond eyes. Flawless skin. Bleach blond hair. A beauty.

“Wow, she’s hot. That her, right?” Casey whispered to Lenny.

The bartender nodded to Lenny who gave him a wink.

“What is she drinking?” Lenny asked.

“What happened to your face, man?” the bartender asked.

“Walked into one of your customers.”

The bartender nodded. “Think I know which one. Alex. Sorry about that, dude.”

“That’s a pretty hot babe you got tagging along. If you can arrange a date with her for me, I don’t need the backstage pass to any rockband, dude.”

Casey leaned over the bar, smiling her sweetest smile at the bartender. “You could just ask the hot babe herself. She’s not deaf.”

The bartender blushed a bit. “Sorry.”

“You can buy me dinner anytime, but you won’t be getting my pussy unless you develop one yourself. Sorry, buster,” Casey told him.

Lenny walked over to Janey with his glass of Jack. “Here, for you.”

She glanced at him like he was some kind of amusing novelty. Then she said, “Sure, why not.” She drained the Jack like a longshoreman. Or someone from an eighties glamrock band.

Lenny smiled. The game was afoot.


TO BE CONTINUED
Posted by jvdsteen at 8:36 AM No comments: