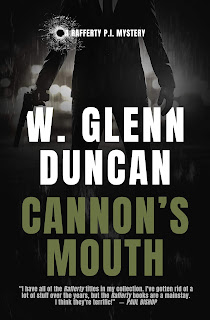 When Rafferty gets mistaken for a hitman. He tries to warn the intended victim but is too late. Then the chase for the real killer starts.
I'm a fan of this series, and the mood is always nice and breezy but this time the plot seemed a bit too thin. Also, while not a long book I had a feeling the story could be told in half the pages.
Still, if you like Spenser you will absolutely enjoy this fun and action-packed series. If you dislike this particular one, don't be discouraged, the other books are better.
Posted by jvdsteen at 10:18 AM No comments:

Tom Leins, author of the Joe Rey stories is kind of enough to visit  my little site and tell you all about his biggest influences... 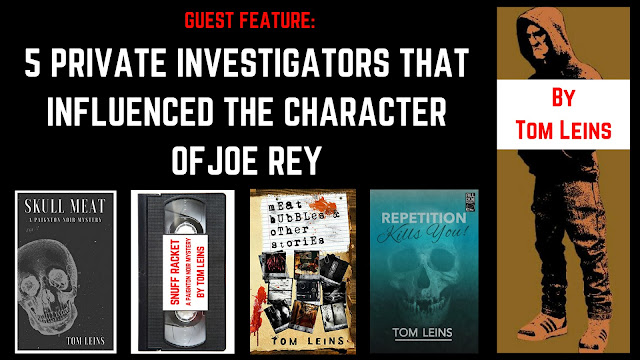 Joe Rey is the protagonist of my Paignton Noir series, which started with 2017’s SKULL MEAT, and continues this year with MEAT BUBBLES & OTHER STORIES (Near To The Knuckle) and REPETITION KILLS YOU (All Due Respect). He is a cut-price private investigator with a nasty side-line in muscle-for-hire work. As the series progresses his investigative skills are honed, and his client list improves, but he never really loses his willingness to get his hands dirty for personal gain and his unwavering commitment to revenge. His influences are a mixture of anti-heroes, rogue cops and bareknuckle fighters, but a number of private eyes have also permeated his character. I’m sure they are all obvious to varying degrees, but that is for the readers to judge!

1. Matt Scudder (Lawrence Block)
The first Matt Scudder novel I read was one of the later books in the series, when he was less tormented, and (I think) living in domestic bliss with Elaine. While I enjoyed the mystery, it wasn’t until I went back to the first book in the series – The Sins of the Fathers – that the character clicked into place for me. Again, that book isn’t one of my favourites, but it does a great job of introducing the character of Scudder – a man seemingly trapped in a purgatory of his own making, numbing the pain with booze and making a meagre living doing ‘favours for friends’. It is a unique, irresistible set-up, and the winning formula is only really tweaked when Scudder gives up the alcohol. Rey’s rooming house is a brief nod to Scudder, although my character’s ‘tragic back story’ – the traumatic episode which has set him on his current path – hasn’t made it into print yet. (All will be revealed in the still-in-progress BONEYARD DOGS...!)


2. Burke (Andrew Vachss)The early Burke books were shocking, brutal tales which gripped me with their beyond-the-pale narratives about exploitation and degradation in 1980s New York. After reading a number of books featuring more conventional private investigators, coming face to face with the shadowy Burke was a real shock to the system. His survivalist tendencies set him apart from the crowd, and he is a man whose methods can come uncomfortably close to those of the ‘freaks’ he is trailing. In some ways, Rey could be likened to a sloppier, less paranoid version of Burke, but that has never really been a conscious decision. I appreciate Burke’s moral code and his ‘Family of Choice’, but the shocking, transgressive cases that he takes on really showed me how dark noir could get.


3. Patrick Kenzie (Dennis Lehane)I really enjoyed the Kenzie and Gennaro books back when I first read them, and Ben Affleck’s 2007 film version of Gone Baby Gone was pretty damn impressive as well! Affleck’s brother Casey was brilliantly cast as Kenzie and excels in some of my favourite scenes in the book, perfectly capturing the character’s inner turmoil. While I have tried to steer clear of a brooding protagonist, I like the moral dilemmas that Lehane presents his characters with. Another element that I have embraced from time to time is the conscience-free tough guy sidekick, in the vein of Patrick’s buddy Bubba Rogowski. It may be a cliché, but sometimes you need to lean on a violent supporting character to get the job done, and Bubba is one of my favourite sidekicks!

4. Nick Stefanos (George Pelecanos)I read the Nick Stefanos books many years ago, and I was always struck by how much of himself the author had seemed to put into the character’s personality, while preserving that fictional angle. In an interview Pelecanos once admitted: “He is my alter ego. He is whatever age I am or was, depending on the period of the book.” I like that idea, and it is something that I have fooled around with when writing Joe Rey’s character, and filling in certain blanks in his personality. He is nothing like me, but I have no qualms about letting him share certain minor personality traits and features. Also, it is important that he ages in real-time, which is another theme that comes to the fore in future books!


5. Joe Pitt (Charlie Huston)
My fifth and final choice is probably the biggest curve-ball. I read very little in the way of supernatural fiction, but I really enjoyed this series. Joe Pitt is an unaffiliated ‘vampyre’, living in New York, carrying out assignments for the city’s various ‘clans’ in exchange for blood and freedom. Ultimately, it was Pitt’s relationship with the clans that captured my attention more than anything. Due to the awkward logistics of travelling between the Five Boroughs, the Clans tend to remain within the confines of their own stomping ground, while Pitt is free to drift between the different regions of the city. I found myself loosely applying this rule to the Paignton Noir-scape – partitioning up different parts of town along perceived criminal fault-lines. Rey has increasingly uncomfortable relationships with most of the town’s would-be kingpins, but he is similarly free to explore all corners of Paignton without fear of reprisal – for now!
Bio:
Tom Leins is a disgraced ex-film critic from Paignton, UK. His short stories have been published by the likes of Near to the Knuckle, Akashic Books, Shotgun Honey, Flash Fiction Offensive, Horror Sleaze Trash and Spelk Fiction. A pair of Paignton Noir novelettes, SKULL MEAT and SNUFF RACKET, are available via Amazon. MEAT BUBBLES & OTHER STORIES will be released by Near To The Knuckle on 2nd June 2018, and REPETITION KILLS YOU will be published by All Due Respect (an imprint of Down & Out Books) in September 2018.
https://thingstodoindevonwhenyouredead.wordpress.com/

Posted by jvdsteen at 1:06 AM No comments: