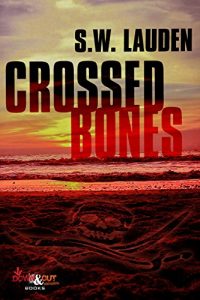 I never figured Tommy Ruzzo or Shayna would be making an appearance after Crosswise, but here they are in a tale that is even more offbeat than their first one.
Shayna is in New Orleans, running shady enterprises when she learns of a true treasure map.  Tommy Ruzzo, in Florida is still longing for Shayna and when manages to track her down just when she's in a lot of trouble.
This is one crazy novella, I tell you. Shayna flaunts her fake boobs, runs around with drugs and has sex with her employees, all pirate impersonators. Every character here can easily be in a Tarantino movie. In fact, I guess the wild and crazy, depraved and funny ride here would fit very well in one. The whole style is so breezy and full of adventure you never know what or who to expect on the next page. I guess that will turn a lot of people off, but I really enjoyed the unconventional style. I can recommend it to fans of Elmore Leonard and Tarantino!
Posted by jvdsteen at 4:04 AM No comments: 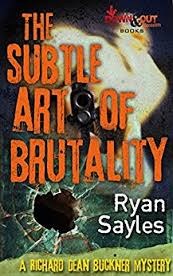 If you thought Mike Hammer was more of a vigilante than a PI, get a load of Richard (''don't call him Dick) Dean Buckner. Buckner is hired to track down a missing daughter, that's standard PI fare right there. But Buckner is not the Spenser-type... He's got tattoos, drinks way too much, smokes a lot, and he just kills the guys he feels like need killing during the investigation.
I loved this approach! It might sound like pulp but in the beautiful richness of the poetic prose there is a lot more, as are the stories of broken people and dreams Buckner encounters, not to mention the flashbacks into his life.
That's the way PI fiction should be, never afraid to dish out the sex and violence but alway with a deeper meaning. Buckner is now one of my favorite new PI's!
Posted by jvdsteen at 8:19 AM No comments:

Interviewed at One Bite At A Time

If you didn't already, check out the interview awesome writer Dana King had with me at his blog here. We talk about my main character Noah Milano and the PI genre in general.

Posted by jvdsteen at 3:47 AM No comments: 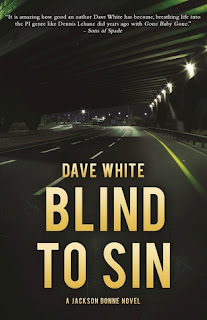 Dave White cites both Richard Stark and Robert B. Parker as his main influences for his latest novel. Considering those are very important influences to my own Noah Milano stories (like the new Serving Justice) I was already sure to like this book, not to mention the earlier entry in this series was awesome.
As much, or even more, of a heist story than a PI story the Stark influence is obvious. Though, it is not just the plot that shows that influence. Also the prose, especially in the Donne scenes has the same feel to it.
In this novel Jackson Donne is freed from prison together with the son of basketball coach / PI Matt Herrick. Herrick's dad, along with a group of criminals intends to steal from the Federal Reserve together with Matt and Jackson. With this money Matt's mother could be saved from cancer.
Unfortunately, everybody has a secret agenda and there's lots of double-crossing and not much honor among crooks.
Meanwhile Jackson Donne makes the journey from PI to psychopathic sidekick as he comes to the conclusion he needs to become more pro-active. I loved the muscular prose of those Donne scenes and loved the way Dave managed to AGAIN breathe some fresh air in the PI genre without using dinosaurs, zombies or paranormal stuff.

Posted by jvdsteen at 2:42 AM No comments: