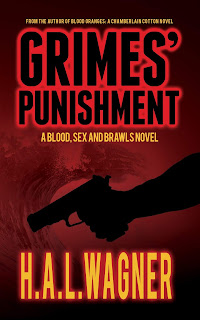 A dark and action-packed tale featuring a unique anti-hero.
What a dark and action-packed tale. I had read a lighter PI tale after this one to get me out of a dark state of mind. The story reads well while listening to death metal (Morbid Angel in this case) I found out.
In this story we follow the journey of a criminal into a PI, his name is Grimes and he's very cool. He's big, he's got tattoos and he's a total badass. He's enlisted by a lawyer to do some good but when an old friend dies from heroin he just goes on a vigilante rampage through Daytona Beach.
The action is gut wrenching in it's realism, the characters described so well they get you either mad or give you a hard-on.
The story works both as a standalone but also as an introduction to a series.
All in all, a dark and action-packed tale featuring a unique anti-hero.
Posted by jvdsteen at 8:30 AM No comments: