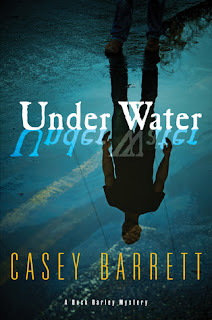 I don't know how this one has managed to elude me for two years, but I'm glad I found it now! It's probably my favorite read of the year. Part of it comes from the gritty story itself, a lot of it comes from the protagonist, pill-popping, Bulleit-swilling, ex-swimmer Duck Darley.
Darley could have been a contender, as an Olympic swimmer. However, like his dad he ended up in jail. After taking some aikido lessons he hires himself out as a self-proclaimed finder. He's more just an unlicensed PI though, specializing in catching married men cheating on their wives. He's not above accomodating the clients with some revenge sex as a bonus. He drinks too much, swipes pills wherever he can find them... Yeah, he's an anti-hero I guess. He really cares about his dog and sidekick, Cassie though. Now don't think she the Joe Pike / Hawk sort of psycho sidekick. Nope, she's a dominatrix and sometimes the real brains of the outfit.
In his first book he is hired to track down the missing sister of a former teammate. When her ex is murdered she's painted by the media as a killer. Digging deeper and deeper he uncovers several dark secrets and ends up in lethal danger.
The "fun" here is in how Darley managed to continue the investigation while drugged and drunk. How he manages to fight off thugs. How he stays in character as an asshole but also as an underdog to root for.
Writer Casey Barrett chose to write what he knows in part as he used to be an Olympic swimmer himself. That angle is however not needed at all. The book is written well, the mystery interesting and the characters lively and original. Top notch.
Posted by jvdsteen at 12:15 PM No comments: 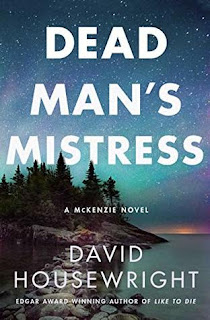 Lenny Parker, PI / roadie / metalhead is back in a new serial, blending a bit of comedy with a hardboiled detective story, one feet into metal culture.

Lenny Parker shook the old man’s hand carefully. His hand looked brittle. The old man sat down at Lenny’s usual table at Mister Janpong’s Thai restaurant. Lenny had been using it as his office for a few years now.
“Can I get you something to drink, Mister Janson?” Lenny asked the old man.
“Some iced tea would be good,” Janson said. He was in his early eighties, dressed impeccably in a beige jacket and matching tie.
Lenny ordered the tea and a bottle of Singha beer for himself.
“What can I do for you?” he asked Janson.
“I want to hire you to look for my Ozzy. He’s been missing for weeks now,” Janson said.
“All right. How old is your son?”
“Ozzy is my dog, not my son.”
Lenny had to admit he didn’t see that one coming. “Eh… All right…”
Mister Janpong put the iced tea and beer on their table. Lenny and Janson nodded in thanks. Mister Janpong made a little bow and left.
“Ozzy is pretty much the only thing I have left. I want him found.”
“I can understand that, I guess. If I wasn’t on tour so often as a roadie I probably would want a dog as well. They’re pretty loyal creatures. But I must tell you I have no experience tracking down missing pets. Missing person, yes. Pets, no.”
“I haven’t got the stamina to go look for him myself. And I have no family left to help me. My daughter died in a car crash five years ago. She was all the family I had left. Now, Ozzy is the only thing I have. I’m afraid I can’t pay you much, but I once heard you took on a case for two bottles of Jack Daniel’s and a concert ticket.”
“Yeah. But it was a Slayer ticket.”
“I’ve got a collection of Black Sabbath albums. The original ones. I think they are worth quite some money. And I know you’re really into metal…”
“What gave me away, the battle jacket, the Megadeth T-shirt or the long hair?” Lenny said, smiling.
“Your reputation,” Janson said.
“Good to know I’m building one. Not sure if the fact I work dirt-cheap is one I want to spread around too fast. Did you name your dog after Black Sabbath’s singer?”
Janson nodded. “I used to enjoy some heavy metal back in the day. Can’t stand that new crap, though. You know with the grunging and all.”
“Grunting.”
“That’s what I said, yeah. So, can I hire you?”
The next tour would be a month from now and right now Lenny had no other cases. So he figured why not. And he was a big Black Sabbath fan. He shook Janson’s hand. “You just hired yourself a private eye, Mister Janson. Now tell me some more about Ozzy. How did he get lost?”
“That’s the bloody strange thing. He was in the backyard one moment while I was on the crapper. At my age that can take a while. When I came back from it he was gone, the gate unlocked.”
“Did you forget to lock it?”
“I’m old, not damned senile.”
“Any idea how it got unlocked then?”
“Hell if I know. It doesn’t unlock itself. And Ozzy can’t do it either.  Almost has me thinking someone dognapped him.”
That sounded a bit unlikely to Lenny. “What kind of dog is Ozzy?”
“A Rottweiler. Here, that’s him,” Janson said and took a picture from his jacket. It showed a huge Rottweiler lying in the grass.
“Nice animal,” Lenny said.
“You got that right.”
“Didn’t your neighbors see anything?”
“One of my neighbors is a pot-smoking kid who never opens his curtains, the other is a nurse who works nights. I’m afraid they haven’t seen anything.”
“Too bad. Well, I guess I can ask around, see if anybody saw Ozzy. Any distinguishing characteristics?
“What? Like a tattoo? He’s a big dog. That’s it.”
Sarcasm. Not Lenny’s favorite character flaw.  “It would be good if I had a way to make sure it’s Ozzy.”
“You call his name, and he will react,” Janson said.
Lenny shrugged. “Guess that might work. Okay, Mister Janson… I will see what I can do. Don’t get your hopes up, though.”
“After the life I’ve led I never do.”

TO BE CONTINUED
Posted by jvdsteen at 1:09 PM No comments: 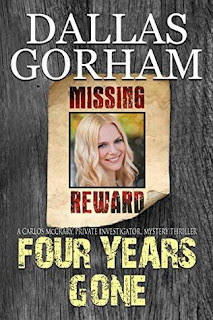 Carlos McCrary is asked by his Aunt Carrie to again investigate the disappearance of her daughter. PI has little hope of being succesful. Still, he flies from Florida to Texas and finds some new clues that get him involved with a dangerous pair of psychopaths.
McCrary isn't the most original PI in the world. He used to be a Green Beret and has two sidekicks who he asks for help during the case. The sidekicks don't add much to the story and get very little time on the pages. Also, there's some chapters from the POV of the victims and criminals, a device that I'm not fond of.
The story is written professionaly enough, though. Also, there is enough action and danger to satisfy readers of PI novels AND thrillers. So, not a favorite, but good enough for me to pick up more books in the series.

Posted by jvdsteen at 8:26 AM No comments: