I ran into JJ Lamb's work on Facebook and thought it might be interesting to learn more about him and his PI Zach Rolfe.

Q – What makes Zach Rolfe different from other hardboiled characters?
JJ – First, I never think of Zach as a hardboiled PI; somewhere between Archer and McGee in approach and demeanor. And then there’s the fact he only handles cases involving gaming; he also has an offbeat sense of humor.

Q – How did you come up with the character?
JJ – I was living in Virginia City, Nevada, running a saloon with my wife, Bette, and writing short stories when I had a moment or two, mostly for men’s magazines. One of the magazine publishers decided to get into doing books and asked if I would like to try my hand at a PI novel. I’ve always been a great fan of the genre, so the combination of a book offer, living in Nevada, and being surrounded by gambling sort of set it up for me. I wanted an unusual name for my lead character and invented Zachariah Tobias Rolfe III. The use of all three names, then tacking on the III, was the result of having worked in a movie theater with a guy named Marion McKinley Parsons III. I’d always wanted to do something similar, and it creates a lot of room for backstory. It was also about as far away as I could get from Bill Pronzini’s “Nameless,” a personal favorite.

Q – What are your thoughts on the whole eBook revolution?
JJ – I think it may be more evolution than revolution. Traditional print publishers are all over the place about it, and it’s going to take a while for it to shake itself out. It’s a great opportunity for authors, but I personally think it could turn harmful if some kind of trusted filter system doesn’t come to the fore ... soon. Bad writing is bad writing and I think free and 99-cent books only demean this exciting new segment of publishing.

Q – What’s next for you and Zach?
JJ – Wish I could tell you that I’m well into another Zach book, but unfortunately that’s not the case. I am keeping a close watch on the gaming scene in the U.S. and elsewhere, looking for the seed of an out-of- the-ordinary plot. In the interim, Bette and I are hard at work on the fourth book of our Gina Mazzio RN medical thriller series, the most recent of which is Bone Pit. I’ve also got a good start on a follow-up book to our suspense-adventure novel, Heir Today....

Q – What other genres besides crime do you like?
JJ – If you mean like rather than write, I’m an eclectic reader. It’s really difficult to find something I’m not interested in, at least at some level. I’ve done some science fiction stories with Bette, but nothing published in the way of books.

Q – What’s your idea about the psychotic sidekick in PI novels like Hawk and Joe Pike?
JJ – They have to be done exceptionally well, like the two you mentioned, but I can’t see Zach taking on a sidekick, psychotic or not. Psychotics as adversaries, yes, but no teaming up with one, male or female. Zach is too much of an I’d-rather-do-it-myself kind of guy.

Q – In the last century we’ve seen new waves of PI writers, first influenced by Hammett, then Chandler, Macdonald, Parker, and later, Lehane. Who do you think will influence the coming generation?
JJ – You left out some important names, like MacDonald and Pronzini; and females such as Muller and Grafton. The best place to look for new trend setters is by checking out writers who win best book awards sponsored by Private Eye Writers of America, MWA, and International Thriller Writers.
However, don’t be taken in by “best” awards that are nothing more than popularity contests; the winning books may be good, bad, or ugly, but the authors are sure to have many, many friends and large families who cast many, many votes.

Q – Why do you write in this genre?
JJ – Because I enjoy it ... it was what I read primarily before I ever attempted to write fiction (I originally was a journalist). At its best, it combines high adventure with fascinating characters and complicated plots.
Posted by jvdsteen at 3:05 AM No comments: 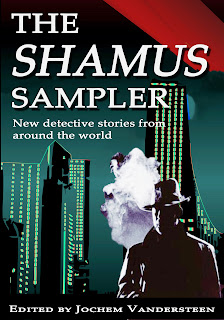 So many people were excited to work with me on the first Shamus Sampler and so many seem to dig the result that I just had to do it...

What am I looking for?
Stories of licensed OR unlicensed PI's. About 5000 words.

What am I paying?
Nothing, but your work will be showcased in a sampler designed to showcase the work of the talented PI writers out there. I will make sure major talent is included, ensuring enough exposure.

What will it be?
A low-priced Kindle anthology. I want as much people to read it as possible to show the PI is not dead.

How do I contribute?
Email me at jvdsteen@hotmail.com with ''shamus sampler'' in the subject. Tell me in a few words the story you (want) to write. I will then email you a Word doc that holds a sample document with the format I would like the story to be written in. This will make the publishing part easier and faster so I might be able to do this thing 4 times a year.
Posted by jvdsteen at 3:21 AM 2 comments: 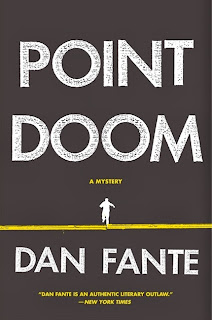 JD Fiorella used to be salesman, a cop and a PI until a shoot-out had him crawl too far into the bottle. Now he lives in Malibu, attending AA meetings, trying to write and making a living selling cars. When a friends gets brutally murdered he set outs for revenge.
The first 80 pages or so you might think you're reading a literary novel. Then the hunter within the protagonist really awakens and you get a hardboiled tale of revenge that would make Mike Hammer blush. Rarely have I seen a protagonist so relentless and merciless. At times I must admit I was a bit taken aback by his ruthless behaviour and willingness to torture. Here's a guy who doesn't need a psycho sidekick. He IS the psycho. Aside from those qualities he picks up hookers, can be a nasty, hot-tempered kind of guy, is a bit sexist... Well, you get the picture. Spenser he's not.
Still, I was fascinated by seeing him in action and to be fair, the main villain is way worse. The prose is dark, angry and to the point. I understand there will be a second JD Fiorella novel, I'm looking forward to that one. The ending to this one had me a bit worried about his return, but thinking about Dan Fortune put my mind at ease.
My favorite read of the year so far.
Posted by jvdsteen at 3:00 AM No comments: 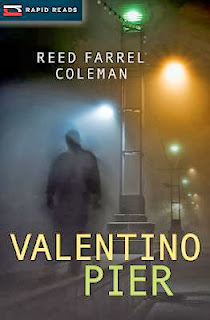 Great things can come in small packages, and this series is proof of that. Not only does it feature a little person as a  PI but it is also a pretty short novel. It's also a fantastic piece of PI fiction.
Gulliver Dowd, a little person and PI offers to help a street kid find his missing (and aptly-named) dog Ugly. When the kid gets beaten up Dowd is determined to find out who was behind that. Meanwhile he falls in love with the assistant of a veterinarian which results in some interesing conversations about how ''normal'' anyone really is.
Dowd is such a wonderful character. He is 100% old-fashioned PI on one hand, on the other hand the fact he's a little person gives him some unique perspective that gives the story just that bit extra to make it stand out.
This is a novel in the Rapid Reads imprint, which means it is easy to read. Short sentences, not too many difficult words. This by no means makes the story any less interesting, just a faster read. I really think a lot of writers can learn a lot about writing a fast-paced, readable book by studying Coleman's prose in this one and it was an inspiration for my own writing. So DON'T hesitate to pick this up because it's a Rapid Reads, instead DO pick it up for that reason.
Posted by jvdsteen at 1:21 AM No comments:

Í have been following the writing of James Winter for a long time now. I love seeing his writing grow.
In this Nick Kepler novel he, together with his partner Elaine, investigate a local pastor who is accused of skimming the collection plate. Meanwhile, an old criminal friend wants to enlist Kepler in his company, but Kepler is not sure he wants to make a deal with the devil. When one of his operatives gets killed Nick has to think about that again, though. After all, he's really interested in seeing justice done.
What makes this one a winner is not so much the writing itself (which gets the job done but is nothing fancy) or the plot, but the fact Kepler is not a perfect person. He sleeps with a married woman, is prepared to cross several lines to do his job... It's this humanity that makes Nick so real a character and makes you want to see what happens to him.
I also liked how he employs various operatives when he needs them. Better than the standard psychotic sidekick.
Posted by jvdsteen at 3:33 AM 1 comment: