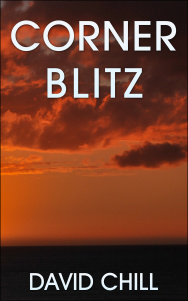 L.A. PI Burnside is hired to find the missing daughter of a governor. A second case finds him involved in the investigation of a football star who is on trial for beating up his girlfriend.
As always David Chill tells the story with great ease and confidence as we follow Burnside in his investigation, as often taking him into college and football territory.
He also is ready to become a father,  making sure this book is also another importan chapter in his life.
We get a better look at how Burnside became the tough guy we know and love which made this one stand out from this reliable series.
There's not a hell of lot more to say, really. Every book in this series is solid, good old fashioned PI fiction without gimmicks, but full of heart.
Posted by jvdsteen at 4:22 AM No comments:


Every year I tell you all what my favorite PI reads of the year were...
Well, here are my favorites again... 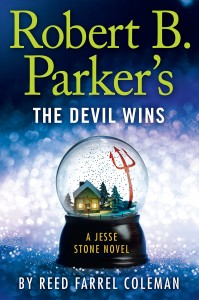 I'm a mystery fan. So when I read a crime novel my main interest is usually in how the plot unfolds. This time, that came second to the scenes where Jesse Stone ponders about his state in the world, his struggle with alcohol. His descriptions of a glass of whiskey made me all thirsty for one and I felt I was invited into the very most intimate life of a man I respect, understand and care for.
In this novel Jesse Stone investigates the death of two girls who went missing during their high school years. One of the cops in Jesse's team, Molly, has a connectioin to the girls and one of the other main cops in the series, Suitcase, has a chance to shine as well. The relationship to Jesse's officers is investigated in as much detail as the murder case, deepening the value of this novel and improving upon the framework created by the great Mr. Parker.
I also noticed Mr. Coleman managed to channel the specific rhytm Parker's prose seemed to have a bit more, which made me enjoy the book even more.
Perfect merging of the style of two great crime novelists.
Posted by jvdsteen at 3:06 AM No comments: 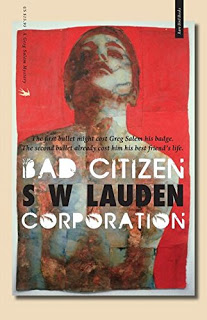 I love punkrock and metal. That's why my character Noah Milano listens to it and Lenny Parker is a roadie. I love the surfer setting in crime novels, ever since shows like High Tide on TV and the Dawn Patrol book. How cool is it when a writer combines the love of punkrock and surfing and combines it into a PI novel? THIS cool!
Greg Salems used to play in a punkband, Bad Citizen Corporation and became a cop. When he is being investigated for a shooting one of his friends gets killed. He sets out to investigate, delving into is own past as well as that of the victim.
There's some awesome scenes in this book, like the exciting climax that is made for Hollywood and the fantastic scene in  a punkrock club that made feel like I was there. I've been to a lot of punkrock shows and that scene described the sounds, the sights AND the feelings perfectly.
The feelings of Greg are written in a very compelling way and the book is as much about a punkrocker in his forties as much as a about a murder mystery. What is so well-done is that one never takes a backseat to the other. If you love crime novels or literary fiction about musicians you need to pick up this book.
Posted by jvdsteen at 2:54 AM No comments: 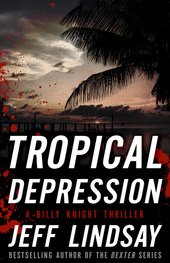 You all know Dexter, tight? The serial killer targetting serial killers. If you haven't read the books you will have seen the TV show. What you might not know is that Dexter's creator published a less succesful book in the nineties, featuring fisherman / ex-cop Billy Knight. This is a reprint of that book.
Billy Knight lives in Key West, he moved there after his family got killed in LA. When an old friend from the force asks his help, trying to find out who killed his son during the LA riots Billy isn't planning to help him. He just doesn't want to face the demons he left behind there.
When something happens to his friend he decides to go to LA anyway and investigate. There he falls in love and faces an almost superhuman foe.
There are some pretty good action scenes in this book and Billy is a real knight in tarnished armour, carrying around some deep trauma. The kind of damaged, but tough character that makes for the best protagonist in (unofficial) PI novels.
The good news is that Jeff Lindsay followed up this one with a totally new book in the series, Red Tide that I will be reviewing as well.
Posted by jvdsteen at 7:33 AM No comments: