One of the most important reasons I developed the Shamus Sampler series of anthologies was that the Private Eye Writers of America didn't seem to put out theirs anymore. Lucky for me, they're back with this one, as always expertly edited by Robert J. Randisi. I'm sorry he didn't do introductions for each tale, used to love those.
The running theme, as can be guessed a bit by the title is sex. Some graphic and kinky, some more implied. Some tales didn't really seem to be real PI tales to me, but of course that wasn't advertised either. A LOT of them are, I'm happy to say, though.
Among the writers are Carolina Garcia-Aquilera, Justin Scott, Gary Phillips, Jerry Kennealy, Michael Bracken, Christine Matthews, Robert J. Randisi, Warren Murphy, Ted Fitzgerald, Dick Lochte, and John Lutz. I loved seeing Max Allan Collins with a Nate Heller story and Jerry Kennealy put in a short and sweet Nick Polo tale. The fact there's a VI Warshawski tale in it should sell some extra copies. Some tales are a bit raunchier than others, Bracken's probably the more hardcore one. If you don't like that kind of stuff, don't worry, it is at the beginning but  not indicative to the rest.
Special mention should go to Ted Fitzgerald's Tex Texeira who is a PI that does background checks for a nudie magazine. I thought that idea was very original and the tale very enjoyable. @Ted: if you are reading this, be sure to contact me for an interview.
Posted by jvdsteen at 8:52 AM No comments: 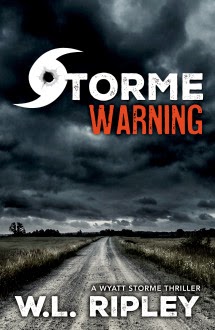 Man, as much as I love Ace Atkins writing Spenser, here's a guy that would be able to continue that series really well. This is totally new book featuring Wyatt Storme that will have me pick up the reprints coming soon as well for sure.
Wyatt Storme is an ex-football player and Vietnam veteran who is visited by his old pal and psycho sidekick, the ex-CIA agent Chick Easton. Chick asks him for help protecting a bad boy movie-star during the shoot of a Western movie. There's also an old enemy of Storme lurking around.
Storme is a really cool guy, a real John Wayne kind of guy. Tall, honest, kind to women and a bit of a loner. He also gets in quite a few witty lines in the Spenser veign. Chick is an almost superhuman sidekick, where there's of course some comparisons to Hawk
The story is paced well with enough twists and action and a shift to the POV of Storme's old enemy that nevers confuses or annoys.
Great, old-fashioned PI writing and a MUST for fans of Spenser, Elvis Cole or my own Noah Milano.
One of my favorite books of the year so far.
Posted by jvdsteen at 8:33 AM No comments: