Where It Hurts (Gus Murphy) by Reed Farrel Coleman 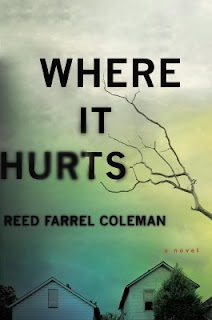 Gus Murphy used to be a cop. When his son dies he loses his marriage, his house and his job. Now he works as a driver for a hotel and works as a bouncer. When an ex-con contacts him, asking him to look into the death of his son reluctantly agrees. He tries to give meaning to the loss of his son through this investigation, but it leads him into a very dangerous search for valuable goods.
Reed has written some really good books, like the Moe Prager series and the latest Jesse Stone novels. This one might be his best one yet, though. The mix of character study and development with a classic hardboiled PI story is so incredibly well-balanced it's hard to put down the book.
Sometimes the words on the pages just tear into your heart, making you feel the pain of Gus Murphy so vividly it... hurts. If you have kids it will hit you even harder.
Gus is so tough, but also so very human that in my eyes he could be the standard the next few PI characters will try to follow.
An amazing new series.
Posted by jvdsteen at 12:46 PM 1 comment: