Lenny was just in time for band practice. He played bass in a thrash/death metal band called The Necromantic Poets. They usually rehearsed in the garage that belonged to their vocalist, Mikey. When Lenny came in Mikey was sitting on a speaker, drinking a bottle of Corona. Casey, sporting blue hair today was practicing her drumming skills. A barrage of blast beats sounded.
“You’re just in fucking time, Parker!” Casey yelled over the sound of her drums.
“Sorry, I’m on a case,” Lenny excused himself.
Their guitarist, Mohawk looked up from the guitar he was tuning and asked, “Anything exciting? Murder case? Extortion?”
“Missing dog,” Lenny answered.
Mohawk snorted. “Sheesh, Magnum PI you ain’t.”
“Never said I was,” Lenny said and unpacked his bass from its case. While he plugged in the bass he told his friends the details about the case.
“I feel bad for the old dude,” Casey said. “I used to have a dog when I was a kid. Broke my heart when we had to put Spike down.”
“Yeah, I get that. If I wasn’t on tour so much I wouldn’t mind a dog.”
“I’m more of a cat person myself,”  Mikey said.
“I got a snake,” Mohawk said. Lenny wasn’t surprised.
“Ugh. You probably feed him living mice? Barbarian!” Casey said. Lenny knew she was vegan.
Mohawk shrugged. “Circle of life, babe.”
“That’s bullshit,” Casey told him.
Lenny figured it was time to nip the argument in the bud. He liked playing with this band. He didn’t want an argument like that to cause it to break up. So he played a bassline that was impossible for Casey to resist. She lay down another assault of blast beats to go along with it. That prompted Mohawk to start riffing and soon they were jamming.
“Niiiiiiiiice,” Mikey approved and saluted them with his bottle.
What followed was an hour of playing their particular brand of loud and heavy music that got them all sweaty and red in the face. They took a break, opening up a case of beer.
“You need some help with the investigation?” Casey asked Lenny while she popped open a can.
“I guess I could use some help. Pay’s pretty damn low, though. I’m afraid it will be hard to compensate you for the time,” Lenny said and wiped off some beer foam from his goatee.
“No pay needed. I’m doing it for the old man,” Casey said. “I could like canvass the neighborhood. Maybe leave some flyers and shit.”
“Count me in as well,” Mikey said.
“Ah, shit… Why not? I’ll help out as well,” Mohawk said.
“Awesome, dudes!” Lenny said. “Tomorrow morning we start? For now, let’s finish our beers and play a Sodom cover, all right?”


TO BE CONTINUED
Posted by jvdsteen at 1:23 PM No comments: 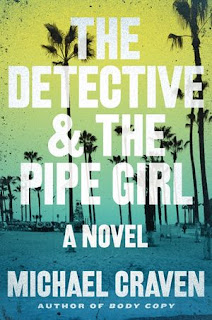 I've had this book for a few years but never got around reading it. I was glad I finally did, though. It has an interesting style where the narrator really tells you the story like he's there sitting in front of you, nursing a beer. To some that style might be a bit annoying, as might the narrator's diversion into his personal gripes and interests. Personally, I like it when a writer has a style of his own while still following the tropes I so love about PI fiction.
John Darvelle is a ping pong playing private eye in Los Angeles. He's pretty much a regular guy but can take care of himself in a fight. He's hired by movie director Arthur Vonz to find the love of his life and hand her a letter. That plunges Darvelle into a world of Hollywood secrets, prostitution and dangerous thugs.
Fast-paced, breezy and funny with a dark edge this one will appeal to fans of Robert B. Parker and early Harlan Coben.
Posted by jvdsteen at 5:12 AM No comments:

Q & A with Mike Baron

I have been a fan of Mike Baron's comic books for decades (Punisher, Badger, Butcher) and he has been an influence on my early writing. So it's a delight to be able to ask him some questions.

Q: What makes Josh "Biker" Pratt different from other hardboiled characters?
John D. MacDonald grabbed me by the throat and wouldn't let go. Travis McGee is a brilliant character. He's of a type. Philip Marlowe, Sam Spade, Jack Reacher. You know the type. A man of integrity, close-lipped (except for Marlowe,) who stands with one foot in civility and the other outside. I've been a biker all my life. I wanted to create a character in Travis' vein, but unique. The name Josh Pratt comes from a roadside memorial I passed one day. I have friends who were patched in bikers and they generously shared their knowledge with me.

Q: How did you come up with the character?
The name came from a roadside memorial. A bicyclist killed in a traffic accident. The protagonist must be sympathetic, someone with whom the reader can identify. He must be violent, when necessary. He must not be a smart ass. There's room for smart asses in hard-boiled fiction. Marlowe. Spenser. But my guy had been through the mill and had all the smart ass beaten out of him in prison. Abandoned at fifteen, bounced from foster home to foster home, the Bedouins were the only family Josh ever knew. Josh came together while I was writing Biker. I wrote it five times before I was satisfied. Now I see his path clearly. Josh became a Christian in prison. This informs his personality. Man needs to believe in something larger than himself if he is going to be happy. Josh doesn't spread the word. He speaks as little as possible. He prays regularly.

Q: What are your thoughts on the whole eBook revolution?
Hell, I'd still be typing on a manual if it were up to me. I'm grateful for ebooks expanding readership. Most of my sales are ebooks. But I prefer a book I can hold in my hand. I like gas-burning vehicles with manual transmissions. I like vinyl. Thank God for small, independent booksellers, who keep this vital tradition alive.

Q: What's next for you and your characters?
I just turned in the 7th Biker, Unfortunate Son. Josh's father Duane, who abandoned Josh at fifteen, returns to hit Josh up for money. Duane's in a whole lot of trouble. He stole something from Ryan Gehrke, the former Miami Running Back who took a knee, and now spends most of his time partying.

Q: What do you do when you're not writing?
Ride my bike, sleep, go to karate.

Q: How do you promote your work?
I just talk. I have no idea how to promote myself. I wish I did! I do what Ann says. She's my promo expert. She's got me on a schedule.
Monday: artwork or graphic
Tuesday: blurb of book
Wednesday: video
Thursday: writing tips “Never Say Nebudchadnezzar Again”
Friday: blog

Q: What other genres besides crime do you like?
Historical novels, horror, biography.

Q: In the last century we've seen new waves of PI writers, first influenced by Hammett, then Chandler, Macdonald, Parker, later Lehane. Who do you think will influence the coming generation?
Those same guys.

Q: How has having been a comic book writer influenced your work?
It helps me visualize, so I can show rather than tell. You can show in prose almost as effectively as in comics.

Q: I was a huge fan of your Butcher series? Any chance we will see any of that work back again?
I don't know. I understand DC has brought him back for some adventures.

Q: Why do you write in this genre?
I don't choose my stories, my stories choose me.

Posted by jvdsteen at 8:27 AM No comments: 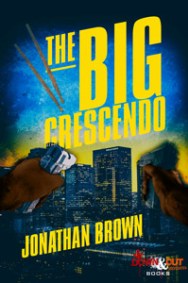 As anyone who reads my Lenny Parker serial knows I dig some music influences in my PI story. And this one really has that one covered. My Lenny is a roadie and bassplayer, this novel's Lou Crasher works at a practice joint and plays the drums. He's also black and Canadian, trying to make a living in the City of Angels.
When the gear of a beautiful customer gets stolen Lou sets out to find it back, citing his hero Rockford as an example. Using his work as a drummer as a cover he gets entangled deeper and deeper in criminal doings and drugrunners. Not a real PI, he makes his set of mistakes but never backs down. Luckily he's got some goodlooking martial artist and a tough black dude in his corner to help him out.
Enjoyable, with a dash of action and fun. Low on the mystery, high on the pacing. I'm looking forward to the second novel in this series.
Posted by jvdsteen at 11:50 AM No comments: