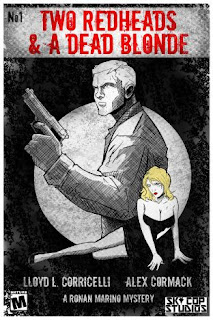 This isn't a novel... It's a comic book! It's also full of the stuff I love so here's my review.
Former Air Force investigator Ronan Marino won the lottery and now spends his time collecting comics, playing  in a band and as a vigilante. When his girlfriend is found dead, the cops pick him up, suspecting him of murder.
There's some fast action as he takes on neo-nazi arsonists and various other thugs. The dialogue is pretty fun with lots of references to comic books. The art isn't fantastic but serves to tell the story.
Marino is a pretty cool character and the supporting cast will be sure to help him along the way to have some interesting stories.
Pick it up if you love both comics and PI's.
If you don't dig comics, you can also pick up the prose novel version by the way. I will!
Posted by jvdsteen at 7:05 AM No comments: 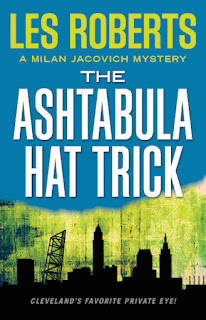 If there's one prime example how to keep a series fresh for years it's this one.
Milan Jacovich as been around for about two decades now and I still love the guy. A few books ago Roberts made the brilliant idea to introduce sidekick K.O. Bannion, a young and angry man who gives the series the more modern edge it needs. With the introduction of Milan's new love the black homicide detective Tobe Blaine we have a great cast that reminds you of the old classic private eyes but still feels relevant and fresh.
In this novel  Jacovich and Bannion assist Blaine who investigates a number of homicides in Queenstown. What they encounter is redneck crooks, religious fanatics and a femme fatale.
Bannion gets enough asses to kick, Jacovich and Blaine's relationship deepens and there's some interesting moral questions being asked in the ending.
Awesome book.
Posted by jvdsteen at 3:40 AM No comments:

Jules Landau returns, tougher than ever. We've seen him get a bit more hardboiled with every book and I like the fact he seems to have gained a bit more attitude.
Hired by a shady character to track down his missing girlfriend he gets involved with counterfeit expensive wine.
The fact wine is used as one of the reasons wrongdoings are being done is original. I am used to seeing either drugs or maybe art for that.
I liked the character of Amy, a psychic with a secret who has a love-hate thing going with Jules which made for some nice tension and fun dialogue.
There's some nice twist and turns to spice up the story, but a lot of it felt slow-moving. I'd say the novel could lose a page or 20.
Fairly standard, but not bad stuff. I will be along for the 4th one.
Posted by jvdsteen at 3:41 AM No comments: