In case you thought Gus Dury's alcohol problem couldn't get any worse, read this one. It kept me off booze! Those problems are not very convenient because together with his friend Hod he's hired himself out as a private investigator to an actress. Her son has been found hanged and she thinks it might have been murder. As Dury investigates he clashes with an old Skull & Bones like group and some gangsters who are after Hod's money.
I sometimes had to put away the book to get some air, so much angst and despair was in this one. I found myself getting back to it quickly enough though, wanting to find out how Dury was going to unmask the killer and survive his fight against the bottle.
Another great installment in a great series. Dark, personal and disturbing this is a novel that will stay with you long after you finish it.
Posted by jvdsteen at 12:38 AM 3 comments:

Q & A with Bill Crider 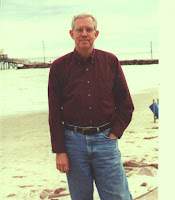 With a new book, Mississippi Vivian coming out this seemed like a perfect time to talk to Bill Crider, author of the Dan Rhodes series, Ted Stephens series and Truman Smith books.
Q: What makes Ted Stephens different from other (unofficial) PIs?
A: Ted's a former cop, but he's an official p.i. Unlike many of them, he's not working for an individual in MISSISSIPPI VIVIAN but for a big insurance company. He's sent from Texas to Mississippi to check out what the company believes is a scam, and he winds up involved in a murder case.

Q: How did you come up with the character?
A: The character was my co-writer's invention. Clyde Wilson was for many years the most colorful and best-known p.i. in Texas. He worked many big cases, and when Ivana Trump needed someone to help with her divorce from Donald Trump, Clyde went to New York to do the job. He told me that Ted Stephens was a composite of himself and an ex-cop that he knew and that the cases Ted worked on were based on actual cases.

Q: What's next for you and Ted Stephens?
A: Clyde died just days after we got the acceptance for MISSISSIPPI VIVIAN. Because he did the outlines for the books and because Ted was his character, there most likely won't be any more books in the series.

Q: Any chance that other characters you've written about will return soon?
A: I wish I could answer that with a "yes," but it's not likely. Truman Smith, another p.i., was one of my favorite characters, and I enjoyed writing about him. But the sales didn't justify the continuance of the series. I must have been Truman's only fan.

Q: What's your idea about the psychotic sidekick in PI novels like Hawk and Mouse?
A: I've been thinking about those sidekicks lately. Dave Robicheaux isn't a p.i., but his buddy Clete Purcell is one of the most psychotic sidekicks around. The other day I thought about the flak Mickey Spillane got because of Mike Hammer's vigilante justice and the violence in those books. But Clete Purcell is as much a vigilante as Hammer ever was, and he's about twice as violent. I wonder if any of James Lee Burke's readers have ever disdained Spillane. I suppose not. If they're fans of Clete (or of any of the other psychotic sidekicks, for that matter), they should love Hammer.
In my own books, I once had Truman Smith wish he had a psychotic sidekick to handle some of the tough jobs.

Q: In the last century we've seen new waves of PI writers, first influenced by Hammett, then Chandler, Macdonald, Parker, later Lehane. Who do you think will influence the coming generation and in what way?A: Good question, but I don't have a good answer because I don't read as widely as I once did. Ken Bruen, for sure. Michael Koryta, maybe. Don Winslow, I hope.

Q: Gerry Boyle came up with the following question: Why write these books? Why not write "literary novels" or poetry or travelogues or memoirs? What is it that draws you to this genre?
A: I've written in a number of different genres, but p.i. had a great appeal to me when I started reading crime fiction long ago. They still do. I think they give writers a chance to write with an appealing voice and to comment on the world around them in a way that a lot of other kinds of books do not. And they're a heck of a lot of fun to write.

Q: What question should we ask every PI writer we interview and what is your answer?
A: The question: Hammett or Chandler? My answer? That would depend on the day of the week. Today it's Chandler, but on quite a few days it would be Hammett. I'm just glad we don't have to choose.
Posted by jvdsteen at 5:12 AM 37 comments:

The Bronx' PI is back! Chico Santana is hired to find Brooklyn artist Gabby Gupta and her husband, Joey Valentin, an old friend of Chico. He's drawn into the strange world of a self-improvement center that is based on religion as well as Superman comic books. In fact, there's enough of comic book references to entertain this geek. There's also a wonderful character in here, Chase, a chubby young woman who is both attractive as well as different from the way most full figured women are portrayed in fiction.
There's a murder to be investigated and there's some fights with thugs. Chico hands out some pretty good wisecracks during the course of his investigation and he shows what an interesting and complex character he is again. While the actual investigation sometimes seems to take a backseat to the colorful characters introduced the book still works perfectly as a mystery, but also offers up a more literary story.
Posted by jvdsteen at 12:37 AM 1 comment: