Ex-cop turned record store owner Dan Spalding's old friend Digger has gotten himself into quite some trouble. When he blackmails the wrong person he needs some help to get out alive.
What follows is the hunt for the secrets an old record holds and the story behind an old skin magazine.
Dan's a pretty cool guy and the relationship with his beautiful employee goes to the next level in this one. Still, this is hardboiled fiction so you know it won't all be happy times.
A short, fast-paced novel with a nice and sleazy mystery and a cool protagonist it's a great read.
Posted by jvdsteen at 12:44 PM No comments: Some PI's (like my own Noah Milano) try to find redemption. Some PI's (like Dana King's Nick Forte) just get darker. Rick Cahill is one of the latter as well.
When sexy-voiced radio personality Naomi is stalked the radio station hires Rick Cahill to protect her and locate the stalker. Then a girl is abducted and Rick has to get involved with that while trying to work out his issues with the Russian mob he got into in the earlier books.
The several plot threads come together nicely and Rick keeps growing as a character. He becomes more hardboiled and darker as we near the exciting climax.
Nice pacing, good prose, good characters in a tight and traditional PI story every fan of the genre will enjoy.
Posted by jvdsteen at 12:41 AM No comments: 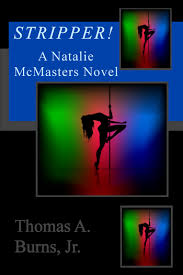 Well, this is something different... The PI in this one isn't a 40-year old ex-cop with a drinking problem, not even a feisty thirty-something independent woman who cuts her hair with a nail clipper... Nope, she's a 20 year old bisexual college girl!
Natalie McMasters is going through college and working as a trainee at a PI firm when she gets involved with a webcam girl who gets killed. Trying to find out who is the killer while coming to grips with her sexuality she gets involved with police corruption and a cyber stalker.
Sometimes the plot veered a bit too much into eighties softporn thrillers for me (you know, the Shannon Tweed kind) but I have to admit this is one novel where we get most things we expect and crave from a PI novel while still doing some new stuff and putting the genre firmly in this era.
It could have been a bit shorter, the pacing isn't always good and the dialogue can falter. However, this is the writer's first PI novel so I expect him to become better with every new book in this new series.
It's something new while not entering supernatural or spoof territory, for that alone you should check it out.
Posted by jvdsteen at 2:02 AM No comments: