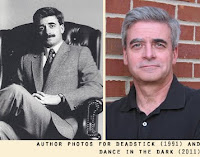 Q: What question should we ask every PI writer we interview and what is your answer?
A: Is there a future for the PI subgenre in the face of the current competition from cozy mysteries and police procedurals/crime scene investigation procedurals?
A: I think there is a future for the story of the lone PI questing after the truth. I hope there is. One tenet of my writing faith is that the mystery can be a serious novel. And I think it's more likely to achieve this if it operates somewhere between the very puzzle-oriented cozy mysteries and the pseudo scientific ones that hold out the hope that the truth is hidden in blood splatters or in bits of DNA, waiting to be exposed by the proper lab test. The truth about human beings is always going to reside in the human mind and the human heart—the real mean streets—waiting to be rooted out by a person with more guts and curiosity than common sense. A PI, in other words.
Posted by jvdsteen at 5:59 AM

Labels: Q and A, Terence Faherty

Hi, greetings from Bali Wedding. Good article and I really enjoyed reading it. Thank you