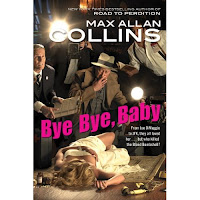 I usually am not a big fan of historical mysteries but always make an exception for Max Allan Collins's Nate Heller series. Why? Because Nate rocks! He's a fantastic mix of Marlowe and Hammer, a tough guy who is like the anti-Spenser. A real anti-hero who is not afraid to bed women and dump them, lets his guns speak and takes a bribe.
This novel is no exception, he even beds Marilyn Monroe! What a guy!
The novel deals with the death of Marilyn Monroe, pulling in a huge amount of historical detail without losing sight the story should be about Nate Heller as well as the era the story is set in. We see Frank Sinatra pop in, JFK and family and historical LAPD figures. Nate feels like a natural in those surroundings, making you forget this is fiction and it's not possible he really hobnobbed with the Kennedies and slept with Monroe.
If you are interested in either of those historical figures, the 1960s or if you could care less about all of that but dig Mike Hammer you should read this one!
Posted by jvdsteen at 12:15 AM

This article is really the one that I needed. I really learned a lot by reading the whole content. Thanks for this.