Turbo Vlost, an ex-KGB agent living in New York is hired to recover a kidnapped girl. To his shock the father is now married to his ex-wife! That's when all sorts of characters from Vlost's Russian past pop up to complicate things and he gets involved in (an obviously well-researched) phishing scheme.
There's some homages to Travis McGee in here: Vlost has given his car a name and he works as a salvage consultant of sorts, returning things and people for a certain percentage of its worth . His relationship with attorney Victoria reminded me of Vachss' Burke and DA Wolfe. The supercomputer Basilisk Vlost's partner uses has some echoes of Person of Interest. The fact I like all those (potential) influences made sure I liked the basic premise of the novel.
I did get a bit confused by the convoluted storyline and Russian names however. It seems Duffy made the popular mistake of trying to put too much in his debut.
I'm looking forward to the second novel in the series but hope it will show less can be more. 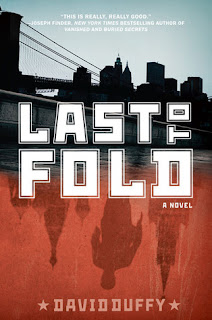