Q & A with Ryan Sayles 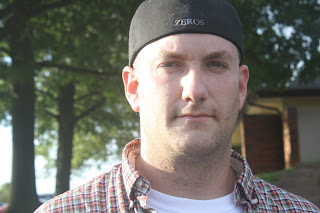 You know that awesome new school of noir writers who publish in all the cool zines like Thuglit, Plots With Guns, Shotgun Honey? Not too many of them write PI fiction, but our man Ryan Sayles actually does. Here's what he's all about...

Q: What makes Richard Dean Buckner different from other hardboiled  characters?
Easy. He’s a magic alien from another universe.
Just kidding.
I actually struggled with this question a little bit before deciding RDB is different just because of his personality and how I write him. I followed a lot of tropes when I first began, trying to give them my own spin as I went. He was a celebrated homicide detective who wound up getting punished for an incident where he probably should have gone to prison. That punishment put him in a spot where he did some high-stakes undercover dope buys, and that led to an assassination attempt which forced him to retire from the PD. So now he chain-smokes, binge drinks hard alcohol and gets work as a bare-knuckles PI. He’s funny and has a solid moral compass, but he’s able to crush and destroy bad guys without remorse to get what he wants. That was the number one comment most people had about the first book. RDB hammer-smashed everybody without blinking and then just went off to the next scene. Maybe got a sandwich after drowning a man in a dirty toilet bowl. Apparently it was a standout trait.
I just figured that was what was necessary.
I always wanted him to be a damn good cop. Now that he’s a PI and not restrained by the Constitution or department policies, he should be more effective. Right?
But mostly I just wanted to write a badass. I love tough guys, I love tough guys who don’t hesitate to throw the first punch, and I think we need a renaissance of chivalry. RDB doesn’t mind meeting bad guys on their level and dealing with them in terms that they understand. He’s a little tough rough around the edges to be truly chivalrous, but in my mind that’s always something that pulls at him to do what he does. In his limited way, he tries for that brass ring. And if he has to stand on a mountain of dead rapists and molesters to reach it, well, so be it.

Q: How did you come up with the character?
In 2006 I read a book called Shadows Over Baker Street which was a short story collection about Sherlock Holmes dealing with the world of H.P. Lovecraft. His superior logic versus insane evil. Then I read Kiss Me, Judas by Will Christopher Baer and fell in love with the narrative voice. I wanted to combine the two. I wanted a badass cop whose skills as an investigator were matched up against the forces of evil. For real. So my first RDB novel was a horror story. When that didn’t pan out, I returned to him later without the monsters.

Q: What are your thoughts on the whole eBook revolution?
Doesn’t bother me. I think the rise of the eBook really helped writers get published. This blockbuster movie, The Martian, is based on a novel which was self-published as an eBook. That’s tremendous. I remember back in the day eBooks and self-published folks were, generally speaking, looked down upon but now the cream of their crop is completing with the cream of traditional crop. The most successful writers published through eBooks are setting their own terms with traditional print, just like the most successful traditional writers.
I tie in eBooks with print-on-demand publishers, who existed well before electronic media. But with POD, any goofball with a computer--like me, for example--could become a writer. The eBook thing was a huge boon for that. I have never landed an agent and I’ve been looking on and off since 2005. Either I’m marketing wrong, am not really publishable outside of genre fiction and the indie scene, or I have the worst luck known to man. But, I’m a published novelist and that is because of eBooks.

Q: What's next for you and your characters?
I’m working on RDB3 now. I’ve already got the main ideas for RDB4 lined out as well. As long as Down & Out books will publish me, I’ll have an RDB for them. In RDB3, Buckner meets an abused woman who reminds him a lot of his deceased wife. He’s intoxicated by her, and winds up getting his balls in a sling over her. Then his best friend and former partner Detective Clevenger has to investigate Buckner. Now he’s on the run from his old alma mater and violent hijinx ensue.
I’m at a point in my life where I want to do different things, and I think with the exception of RDB--I’ll always write him because, well, RDB--I’ll be dipping my toes in different waters. After becoming friends with Craig McNeely I’ve really developed an interest in writing pulp action/adventure and sci fi.

Q: What do you do when you're not writing?
I work. Right now, the question is really what do I do when I’m not working? I was a police officer for six years and left that to become an industrial maintenance technician. I work on the machines and systems in a nearby factory. And man, it’s a lot of hours. At the PD I could write between calls and in that way was able to keep up with my obligations. As a tech, I’m running around constantly. When I get home, I have to be a husband and father to five first. That, and sleep.
I am enjoying listening to audio presentations of various Catholic things. My drive to the PD was around twenty minutes each way, so I got used to popping in a CD or streaming a podcast and learning. I dig that more than listening to music now. For Christmas my wife bought me the “history package” from Catholic Answers, an apostolate based in San Diego, CA. It consisted of four audio presentations and four books, all covering Catholic history topics. The one covering The Battle of LePanto, where a Christian League of sailors and swordsmen repelled the vastly superior fleet of the Ottoman Empire in a decisive and world-changing fight, was incredible. If they’d lost, the Ottoman Empire probably would have taken control of much of Europe.

Q: How do you promote your work?
Ha! Not well. I have a Twitter, an author page on Facebook, a website. I’m not good at keeping up with any of them.

Q: What other genres besides crime do you like?
Most, really. I’m not a romance guy. But if it has some adventure, mystery or cool plot twists I’m pretty game. I’m not really attracted to Lord of the Ring knockoffs; elves, dwarves, magical swords, evil sorcerers. I don’t seek them out but if one were recommended I’d read it.
I’ve gotten past the “more noir than any other noir” concept people seem to be latching onto nowadays. If things are so damn bleak that you want to commit suicide after reading it, I don’t want to read it. I’ve lost enough faith in humanity over the past several years to where I don’t want to read about it as well.
That affects my writing in a lot of ways. It’s one of the main reasons I’m so attracted to the not-crime stuff now. I like the Indiana Jones-type stories where it’s serious but fun. Big chase scenes, mostly unbelievable fist fights and action, exotic scenery. That’s something I’d like to get into.

Q: In the last century we've seen new waves of PI writers, first influenced by Hammett, then Chandler, Macdonald, Parker, later Lehane. Who do you think will influence the coming generation?
No idea. That’d be a great question for Brian Lindenmuth, Benoit Lelievre or Craig McNeely. Or are you asking if I will be the sole influence for the next generation? Because if you are, then yes. Without me, there are no 21st century private investigators.

Q: Why do you write in this genre?
I started off writing in it for two reasons: one, I liked the tone and two, I used it to work out my own moral experiences. I had to be someone different than who I am to cop where I did. People don’t really understand how shitty that job can be. I think that’s why some cops--not nearly as many as the media would have you believe--turn bad. No one calls the police when they’re having a good time. People only call police when they need back-up. Your nephew show up uninvited to Thanksgiving high on meth? Again? Can’t make him leave? Call back-up. Grandma is dying in the hospital tonight and the whole family is in the waiting room, letting their drama take center stage and you can’t control the crowd? Call for back-up.
So we show up and deal with other people’s messes, and inevitably they don’t like that we had to arrest someone so now we’re the bad guys. They spent years cultivating problems and we were supposed to fix them in five minutes.  I’ve pulled over people for doubling the speed limit, zipping in and out of traffic like they were bumper cars, and when I give them their well-deserved ticket I get to listen to how there are murderers and rapists out in the world and I was wasting my time on that particular stop. “Well, I mean, sure, this is crime right here,” they’d say as they motion to their ticket, “but there are real criminals out there. This is just ridiculous.” But I imagine that same person would see someone else driving just like they were and whine, “Why isn’t there a cop pulling over that asshole?”
People like cops when the cops aren’t applying the law to them.
So I wrote crime to illustrate that in some way. To work out the moral oddities I saw in people. I never really wrote about cops per se because I saw it everyday. I usually wrote from the “bad guy’s” perspective because it gave me a way to work through why they were doing what they were doing. That took a long time to find peace, but I think I have now.

BIO - Ryan Sayles is the author of Subtle Art of Brutality, Warpath and the forthcoming Goldfinches and Swan Songs Always Begin as Love Songs. He has over two dozen short stories in print, online or collected in That Escalated Quickly! and the forthcoming I’m Not Happy til You’re Not Happy. He is a founding member of Zelmer Pulp and may be reached at Vitriolandbarbies.wordpress and myBEARDDOMINATESyou.wordpress.