Below The Line (Mike Millek) by Steven Jankowski 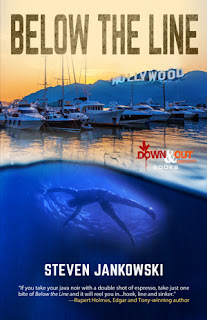 As many of our favorite hardboiled characters do, Mike Millek has a boat. He's also a limo driver for the stars in Hollywood. When one of  his client, a music producer, ends up dead he also ends up with a lot of cash in his hands. He decides to keep it, which gets him into all sorts of trouble.

Not so much a PI story as a noirish tale this one is full of people who only think about money and sex. Millek is a nice enough guy, but has some characters flaws when it comes to his morals. Of course Hollywood is a great place to be the background for this kind of tale. The fact the author has inside knowledge of Hollywood and owned a boat himself brings some authenticity to the book, which I enjoyed.

There seemed to be a bit too much of ''tell instead of show'' in some places and it took quite some pages to get the story started. A bit too much time was spend talking about Millek's background in my opinion. Still, there is some atmosphere to the story and enough action and double crossing to make it a good read.