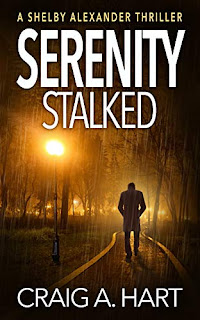 Shelby Alexander, retired boxer and fixer gets involved in a serial killer case when his lady love is endangered. When the killer tries to set him up for a murder he has to face the local law, who are not a fan of him after he took down some local criminals the hard way.
I liked how Shelby had his doubts about his younger girlfriend. Shelby himself is a good, aging tough guy in the Eastwood manner.
The writing is pretty tight and readable. The pacing is good, the dialogue attractive. The plot, however, is a bit thin.
I am not a fan of scenes written from the POV of a serial killer and this book has a lot of chapters of those. That's the stuff of those thrillers featuring profilers, not a good PI novel. Not that the POV was badly written, it does create the effect the writer has probably been looking for, making him a crazy and scary individual.
A nice, quick read. Nothing more, nothing less.
Posted by jvdsteen at 7:44 AM