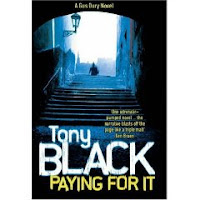 I've met nicer guys than Gus Dury in PI-books, but not often more lifelike ones. Ex-reporter Gus Dury went to find comfort in the bottle when he lost his job. During the novel he doesn't exactly fight with alcoholism but tries to function while being drunk. He is asked by a friend to look into the murder of this friend's son. Along the way he confronts an over the top gangster, a true femme fatale and other unsavory characters. The setting of Edinburgh is used to great effect but never overdone so no worries that it will read like a traveling guide!
A cross between early Pelecanos, Ken Bruen's Jack Taylor novels and Ian Rankin this makes for fantastic reading. What made me really enjoy the book were the pop culture references and quotes that seemed to pop up on every page, making every single page interesting to read. Guys truly comes alive in the narrative, making you sometimes root for, sometimes pity him.
We already may have Sons of Spade's Favorite Novel of 2008 here!
Posted by jvdsteen at 9:21 PM

Mr. Steen-I wonder if you'd be willing to write about a favorite "forgotten" book for my blog project. You can see the last three months on http//pattinase.blogspot.com
I'm looking for reviews for the last half of August. Thanks for considering this request. Patti