Q & A with Reed Farrel Coleman 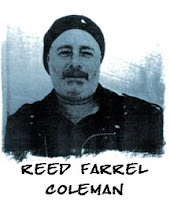 Today we offer a Q & A with the talented author of the Moe Prager (and other) series, Reed Farrel Coleman.
Q: What makes Moe Prager different from other PIs?
A: I realized that I was fairly bored with reading retreads and imitations of Spade, the Continental Op, and Marlowe. I felt that no matter how well I might be able to do it, my version of the Christian-white guy-wisecracking-alcoholic-gun happy-quick fisted-loner would only be another iteration of what had been done as well as it could be done. So in creating Moe I decided to take all the cliches, conceits, and conventions of the PI genre and turn them on their ear. I didn’t want to destroy them, just play with them. So yes, Moe is white, but Jewish. Yes, Moe is an ex NYPD cop, but not a detective. He was just in uniform and he wasn’t very distinguished at the job. Yes, Moe was hurt on the job, but not in the line of fire. He slipped on a piece of paper and ruined his knee. Yes, Moe is haunted, but not by anything he did on the job. He is haunted by something he’s done after retirement. And what haunts him is an act of ommission, not commission. Moe drinks, but he’s no drunk. He’s happily—for the most part—married, has a family, a steady source of income, a mortgage and a car payment. The trick for me was to still produce entertaining books in spite of going against the tide of cliches.

Q: What are your thoughts on the psycho sidekick in PI novels?
A: I am hesitant to criticize my colleagues for choosing to employ what I call the psycho ex machina in their books. The psycho sidekicks have been used to great effect by Walter Mosley, Lawrence Block in the Scudder novels, and many other PI writers. For me, however, it spoils the opportunity for the PI to confront great moral dilemmas. If the PI can simply turn to an already lost soul to do the nasty work, then what is it that the PI has to face? In many ways, PI novels are built on moral dilemmas. So distancing your protagonist from the most powerful moral taint works against that.

Q: You are of course also the writer of the Dylan Klein books as well as some under the Tony Spinosa name. What happened to Dylan and why do you continue writing under the Spinosa name?
A: I had never written any long fiction before trying the Dylan Klein series on for size. Amazingly, the very first long piece of fiction I ever wrote was published as Life Goes Sleeping, my first novel. I actually used the series to teach myself how to write crime fiction and to work through all the issues—overwriting, perspective, plotting, etc.— nascent authors must write past. I just happened to be lucky enough to be published while I was teaching myself. You can actually see my growth as a writer and the development of my skills during the course of the three books. What happened was the series ran out of steam and I felt a need to move on, but I will always have a special place in my heart for Dylan. So much so, my son is named Dylan!

I came up with the invention of Tony Spinosa(Hose Monkey, The Fourth Victim) because I was at the end of my contract with Viking/Plume and I didn’t know if they would renew me. But I needed to write and I wasn’t willing to sit on my hands and wait to see what their decision would be. So I invented Tony and wrote under his name. His books are different from mine and I enjoy writing in third as opposed to first person. It helps me grow as a writer.

Q: How did you get published?
A: I wonder that myself sometimes. I did it in a way that would not be possible in the States any longer. I had no agent, wrote no query letters, and broke every rule. I simply mass mailed two thirds of the manuscript to every publisher in New York. And as I always say to my writing students: One yes is worth all the nos.

Q: What’s next for you and Moe?
A: Moe is kind of on hiatus now. I needed to change the series if it was to keep me interested and for me to move ahead. And if you read the fifth Moe book, Empty Ever After, you’ll see that I moved the series up just prior to September 11th, 2001. Moe’s older now and his life has taken a radical change. I’m done with the overriding story arc of the first several books and want to explore Moe as an older man, closer to my own age(52). I want to see what Moe can do with the future instead of the past. Can he, I wonder, move on? I’m now negotiating for new books with Bleak House.

Q: How do you promote your books?A: I do most of the traditional things: tour, post cards, conventions, guest blog, etc. But I’ve also begun to do some non-traditional things. This coming November, for instance, I am booked at three large Jewish book fairs. My publisher for the Tony Spinosa books is trying to book me with trucking associations(Tony’s protagonist Joe Serpe drives a truck). I teach writing at Hofstra University(founded by a Dutch family, by the way) in the summer and am trying to develop a summer mystery conference. I try to do as many writing related activities as possible because name recognition helps with sales.

Q: Do you have any favorite Sons of Spade yourself?
A: As I mentioned, I love Block’s Scudder books. I too love Peter Spiegelman’s John March. I love Ken Bruen’s Jack Taylor. I adore SJ Rozan’s Bill and Lydia books. Frankly, I’m a sucker for PIs.

Q: In the last century we’ve seen new waves of PI writers, first influenced by Hammett, then Chandler, MacDonald, Parker, later Lehane. Who do you think will influence the coming generation and in that way?
A: Tough, tough question. I don’t think that’s a knowable thing because you can’t look at the current slate of PI writers, even the biggest names, and know. It’s like the old argument about the lasting impact of the Beatles vs the Beach Boys vs The Rolling Stones. Oddly enough, it’s the Who and the Kinks most later bands point to. I hope my work has some influence. I think Ken Bruen’s has a chance to make an impact. Maybe Daniel Woodrell. I think you can already see the effect of Lee Child’s Jack Reacher on various sub-genres. The concept of serial stand-alones is genius. Sorry, I know that’s kind of amorphous.

Q: Christopher G. Moore came up with the following question: “When does an author of a PI series decide to bring a series to a final end?”
A: That one’s easy for me because I’ve been there. When I have nothing left to say through the words and actions of that series’ particular protagonist, it’s over. Pay me enough money, though, and I’ll bring Dylan Klein back to life faster than Lazarus!

Q: Faced with telling the truth or producing a just result, which should the PI choose?
A: A just result. The truth nearly always makes things worse.
Posted by jvdsteen at 4:48 AM