Guest-Post: Look Who's Reading Mine by Bruced DeSilva 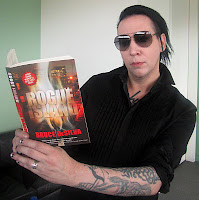 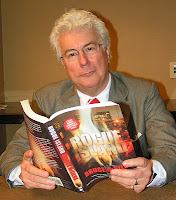 Fans of Bruce DeSilva, author of Rogue Island might have seen the cool 'Look Who's Reading' posts on his blog. I asked Bruce to tell us how they came about...

Publishers spend the most of their limited promotion budgets on sure winners – the latest books by the likes of Lee Child and Laura Lippman. A first-time novelist who wants to tell the world that he’s written a book is largely on his own.

So last fall, as the publication date for my first crime novel, “Rogue Island,” drew near, I was wracking my brain for a way to get some attention.

“I know,” my wife, the poet Patricia Smith, said. “Why don’t we take pictures of famous people reading your book? We can post them on your blog, and on Facebook and Twitter?”

That sounded like a plan. Books are sold largely by word of mouth: One person reads it, likes it, and tells his or her friends. Social networking sites are good for writers because they have greatly expanded the reach of word of mouth.

The problem with these sites, however, is that when you post something, it is seen only by the people you have “friended” on Facebook or who follow you on Twitter. However, you can reach many thousands more if your friends like your post enough to repost it, passing it on to THEIR friends.

The right photos, I thought, just might do the trick.

So Patricia and I started toting a camera and a copy of my book around in case we ran into famous people. Except sometimes, we forgot. It would have been nice if we’d had the book with us when we ran into Chris Rock at the Bronx Zoo.

But over the last year, we accumulated 84 pictures of famous people reading “Rogue Island,” and I’ve been posting several each week on Facebook, Twitter and my blog, brucedesilva.com.

More than half of those who posed for our cameras are famous crime and thriller writers – Dennis Lehane, Walter Mosley, Val McDermid, Ken Follett, Lee Child – taken at crime writing conferences including Mystery Writers of America, Bouchercon and Thrillerfest.

But there was also Andrew Young, former ambassador to the United Nations, whom I ran into on a trip to Washington, D.C.

And Vincent A. “Buddy” Cianci Jr., TV pundit, convicted felon and former mayor of Providence, R.I., where my novel is set.

And famous journalists like Eugene Robinson and Roy Peter Clark, happy to do a favor for a former member of their tribe.

When Patricia journeyed to Hollywood to do a poetry reading at the Getty Museum, she snagged photos of actresses America Ferrera of “Ugly Betty” fame and Amber Tamblyn, who starred in “House,” “Joan of Arcadia,” and “Sisterhood of the Traveling Pants 2.”

My favorite, though, was Patricia’s picture of Goth music star Marilyn Manson, who posed for two photos – one reading the book and another holding it against his crotch. I used only the first one.

The Manson photo was the biggest hit. When I posted it on my bog, I got six times the normal number of daily hits.


Most people just held the book open and smiled, but a few mugged for the camera. Sara Paretsky, a Mystery Writers of America Grand Master, and Marcia Clark, the lead prosecutor in the O.J. Simpson trial, stared at a page with their mouths open, as if they’d just read something shocking.


And no one, not a single person, turned us down.

Did this sell any books? It’s impossible to say for sure, but it didn’t hurt. “Rogue Island” has sold well for a first crime novel – and nearly a year after its release, it’s still selling.

Now I need to come up with a promotion idea for my second novel, “Cliff Walk,” which will be published by Forge next May. Any suggestions?
Posted by jvdsteen at 4:18 AM

buy retin-a online will retin a help wrinkles - buy retin a 0.1 no prescription