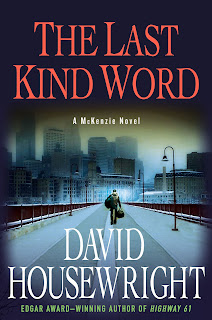 A new Rushmore McKenzie novel always gets to the top of my TBR-list. Alwasy entertaining and easy to read it is the perfect series for fans of Spenser or earlier Elvis Cole novels. I wasn't disappointed by the latest entry in the series.
McKenzie is asked by the ATF to infiltrate a gang of smalltime and smalltime bank robbers so he can find out who is supplying them with assault rifles. Channeling his inner-Parker (from Richard Stark's great series) he plays a hardboiled criminal called Dyson. This role gives him the chance to really give in to his wild side which made for enjoyable reading. Luckily there's also a bit more about his relationship with his best friend's wife and his own girlfriend, bits I always enjoy.
David Housewright always manages to come up with original plots for his hero, by having his hero go undercover he was able to write a heist novel instead of a PI novel while still using all the great bits that compromised earlier novels of this series.
Posted by jvdsteen at 5:01 AM