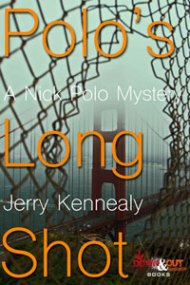 How cool is it to see Nick Polo back in action? He was one of those cool PI's in the nineties when the PI novel was pretty popular. Nick is an ex-cop and ex-con who likes to unwind by watching the bubbles go from a bubble machine. He's also very believable in his investigations, due to the fact his creator is an actual PI himself.
In his return he is hired to track down a stolen antique knife. During this investigation he meets rich folks, other private eyes, gangsters and a femme fatale. The prose or story aren't ground-breaking. There are no huge twists to the archetypical PI character either.
What we do get is a solid PI tale that is easy to read with an engaging protagonist. I applaud Down & Out Books for getting him back on the streets and hope they will do that with more PI's from the nineties.
Posted by jvdsteen at 4:16 AM