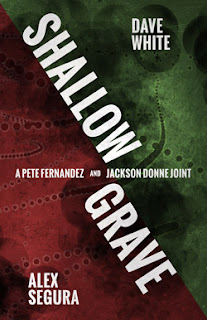 I used to love those special times characters like Superman and Spider-Man teamed up. Two great heroes from two creators, together. Showing their differences and what they had in common. So of course I was excited about this crossover between two other beloved characters, Alex Segura's Peter Fernandez and Dave White's Jackson Donne. Both writers love their comic books, so I was sure they would do a good job.
Fernandez is hired to find a missing person. During that investigation he asks Donne for help, as he was the PI who was hired before for the job. The catch here is that Donne is in prison but he still manages to do some more hands-on work than you'd think.
Extra cool points go to the fact the missing person is a musician. As an amateur rock journalist I love the music scene so with the added crossover thing this was the sort of read I love. Add to that it's a novella which form I absolutely adore as well this is a personal favorite.
Posted by jvdsteen at 4:02 AM