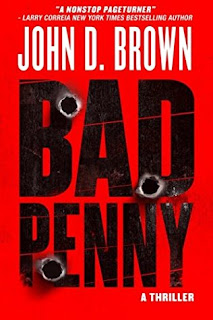 This is an action-packed book, more action/adventure than hardboiled crime fiction. Ex-con, Army Special Forces vet Frank Shaw gets into trouble when some old prison ''buddies'' show up asking for a favor and his nephew gets kidnapped. Trying to get him back he clashes with his old prison ''buddies'' and encounters a ring of people smugglers. Luckily he is aided by some unexpected heroes.
Basically, this is one long action movie. Frank shoots, flies, drives and fights his way into and out of trouble. Along the way there's some buddy movie style banter to lighten the mood and to give some moments of rest between the action scenes.
I'm not a big fan of this kind of book, preferring just a bit more mystery to the mix but I have to admit that John Brown knows how to write an action scene. You can just see the bullets flying in your head.
Good reading for fans of Lee Child, Matt Hilton and action blockbusters of the nineties.
Posted by jvdsteen at 2:47 AM