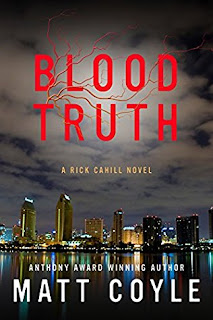 Few so traditional PI series are as succesful currently as the Rick Cahill series. Matt Coyle really knows his stuff and manages to tell a great PI story without going out of his way to avoid the familiar tropes. In this latest novel in the series Rick encounters his most personal cases ever. Not only is he asked by his ex-wife to find out if her new husband is cheating on her, he also investigates why his dad was thrown out of the police force.
Trying to deal with his past and upbringing, clashing with the cops and trying to be a friend to a female PI Rick has a lot of challenges thrown on his path.
It's an emotional ride with just the right amount of action and mystery thrown in, written in clear and well-paced prose.
Posted by jvdsteen at 11:58 AM