Behind The Wall of Sleep (Henry Malone) by James D.F. Hannah 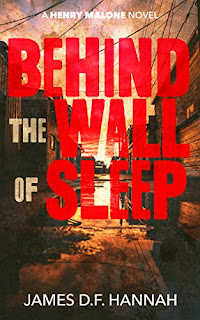 Ex-State Trooper Henry Malone is back again with his AA buddy Woody. A local stripclub owner wants him to run for sheriff and he's hired to track down the money that got stolen at a local country concert.
Malone encounters some lowlife characters and situations that tug at his heartstrings. Malone again shows that he can be a tough guy when he deals with evil men but is also very human. As ever the dialogue is witty, the action fast and furious and the metaphors funny.
I just love how this book is very dark but always has a little bit of fun thrown in that make you able to come up for air in a dark river of violence and depravity.
This is one of my favorite series of the last few years and this new entry in the series proves again why that is.
Posted by jvdsteen at 7:08 AM