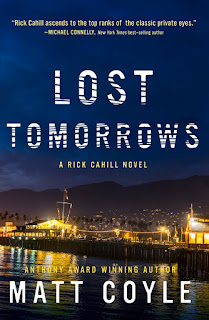 I have read all books in this series and the ride over to this one has been great. The series started with PI Rick Cahill being suspected of killing his wife and him quitting the force as a result. Now he gets the chance to avenge her death.
When his former partner gets killed in a hit and run he's hired by her sister who suspects her death might not have been an accident. This has him investigating his own wife's death again and forces him to discover if he is willing to act as judge, jury and executioner.
As always Matt Coyle writes a well-paced crime novel that has room for mystery, action but also good characterization. Rick Cahill is a true anti-hero, always having to choose between right and wrong like my own Noah Milano. Always an inspiring read.
Posted by jvdsteen at 12:41 PM