Q & A with E. Michael Terrell 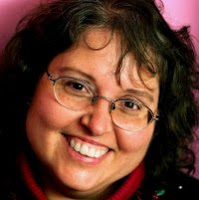 Her first novel, Racing The Devil was also one of the biggest PI-surprises of 2009 and one of my favorite books. So it's a pleasure to be interviewing E. Michael Terrell.

Q: What makes Jared McKean different from other (unofficial) PIs?
I wanted to show the emotional complexity beneath the hardened exterior of the traditional, tough-guy PI. Jared is a former homicide detective turned professional private investigator. He’s a modern-day hero who practices Tae Kwan Do and natural horsemanship—a blend of strength and compassion. I think his personal connections are what distinguish him from other private detectives in the genre. He has an eight-year-old son with Down Syndrome, and he shares a house (platonically) with a gay man who has been a friend since kindergarten and who is battling AIDS. Jared’s experiences as the father of a cognitively disabled child and the friend of a terminally ill man have given him a sensitivity he might not have otherwise developed. Unlike many other detectives in the genre, he has strong family ties and a tender relationship with the ex-wife he still loves. The lone-wolf PI with an acrimonious ex-spouse is ubiquitous in the genre, so I wanted to show a different type of failed relationship—the one in which both parties love each other, but simply can’t make it work.

Q: How did you come up with the character of Jared McKean?
I was trying to write a book about a female private investigator, but I kept coming up with bad Kinsey Milhone knock-offs. The world doesn’t need any more Kinsey Milhones; Sue Grafton already did a terrific job of creating her. While I was struggling, I kept seeing a picture in my mind of a tall, rangy (and very hot) man wearing jeans and a leather bomber jacket that I knew had once belonged to his father. This man was leaning against a wooden fence surrounding a horse pasture. His arms were crossed, and he had a bemused expression on his face. I finally realized he was waiting for me to give up trying to write about this woman I didn’t understand and write his story instead.
I knew he was a former homicide detective, because most PIs come from law enforcement backgrounds. (I considered journalism, but Steven Womack’s wonderful Nashville-based series featured a former journalist turned PI, and I didn’t want to tread that ground, which he had already covered so well). I wanted Jared to have left the police force against his will, but I also wanted him to be a man of integrity, so I wanted him to be innocent of whatever infraction he’d been dismissed for. After discussing my dilemma with a retired homicide detective, I gave Jared an ex-lover who is a news anchor and who bugged his phone to get confidential information about ongoing investigations. To protect her, he took the rap and left the force in disgrace. That told me something about his Galahad complex and his fatal weakness—a need to protect women. It’s this weakness that gets him framed for murder in Racing the Devil.
Once I knew that about him, I sat down and made a list of characteristics and interests he and I might have in common. I had a red belt in Tae Kwan Do, a nice, useful skill for a crime fighter. I love horses, so I made him a horseman. I used to do a lot of community theatre, and I thought it might be good for him to have a little acting experience, since his knowledge of theatrical makeup techniques would allow him to use disguises. His acting ability and knowledge of disguises made him an ideal candidate for undercover work, so I wrote that into his history. I had him decide to transfer from undercover work to the homicide department because undercover work is so dangerous and his wife was worried about him—especially once their son was born. That set up the central conflict of their marriage—his need to be heroic versus her fears for his safety. When he offered to quit the police force and take a risk-free job, she said, “It’s not what you do. It’s who you are…You’re a hero looking for something to die for.” I gave him my elderly Akita and a Quarter Horse he’d had since he was a boy. His elderly animals, combined with his love for his ex-wife, revealed the core of his personality—his incredible loyalty. He never gives up on what he loves, even when that means redefining relationships. That “never-give-up” characteristic carries over into all the other areas of his life; not only is he loyal, he’s stubborn.
It was like following that golden thread through the minotaur’s maze. One discovery led to another, which led to another, which revealed a whole constellation of other qualities and a thousand small moments in his history. It began to feel less like I’d created him than that I’d discovered him.

Q: How hard is it for you as a woman to write about a man?
I actually find it harder to write female characters. There’s a tendency to bring too much of myself to the page. Writing Jared gives me the distance I need to make him more completely his own person. I’ve always had close male friends, so I write the first draft as if Jared is telling his story to a woman he is very close friends with, but in whom he has little or no sexual interest—someone with whom he’s very comfortable. After I’ve edited it as thoroughly as I can to make his voice consistent, I hand it over to a group of readers, male and female (mostly male) to see if I got it right. If I get feedback that tells me a certain action or phrase is too feminine, I change it. Sometimes I get conflicting feedback. One man says, “No straight guy would do this,” and another says, “Yes! This is exactly how it is.” In those cases, I take both comments into consideration and see which seems most true to the character.

Q: What's next for you and Jared McKean?
In the second book, the man who seduced Jared’s teenaged nephew, Josh, has been murdered in what appears to be a ritual killing. At first, Josh is a suspect. Then it becomes clear that he’s a target instead. To save his nephew, Jared has to find and stop the killer. Since the murdered man was a vampire wannabe, Jared’s search leads him to a dangerous fringe of the Goth subculture. The manuscript is finished and is currently trying to find a home with an agent.

Q: How do you promote your books?
Marketing is my weak area, but I’m learning. Sending copies to sites like Sons of Spade has brought some good word-of-mouth exposure. I’m also the Thursday contributor to Murderous Musings, a group blog written by five other mystery writers and myself. I’m on Facebook, Twitter, Goodreads, Shelfari, MyShelf, MySpace, and Crimespace, and I try to post regularly (though I don’t always manage that). I do book signings and events at local bookstores and libraries, and I’m trying to make contact with book clubs. I’ve spoken at a few of those, and it was a wonderful experience. I’m not a naturally outgoing person, but I love to teach, so book clubs and conference panels are good venues for me.
One of the best things I’ve done is volunteer for Killer Nashville, a local crime literature conference founded by author and independent filmmaker Clay Stafford. As executive director of the conference and a sponsoring author, I can help other writers and also get exposure for my own books.

Q: Do you have any favourite Sons of Spade yourself?
I have many, but I’d have to put Robert Crais’s Elvis Cole and Joe Pike at the top of the list. The early Elvis Cole books are very good, but Crais just gets better and better as his stories get darker and more complex. For sheer lyricism, no one can touch James Lee Burke. (William Kent Kreuger, maybe, but his protagonist, Cork Cochoran, isn’t technically a PI.) And, of course, just about anything by Lawrence Block, John Connolly, or Dennis Lehane is golden.

Q: In the last century we've seen new waves of PI writers, first influenced by Hammett, then Chandler, MacDonald, Parker, later Lehane. Who do you think will influence the coming generation and in what way?
I think PI novels are moving away from the spare writing of Chandler, Parker, and Leonard, and toward the very richly detailed style of Crais, Burke, and Connolly. It’s a style I think has been influenced by writers of police procedurals, like Michael Connelly, John Sandford, and Jeffery Deaver.
One of the biggest influences on writers of modern PI fiction is technology. It’s not especially riveting to watch your hero pecking away at a computer. Also, criminal investigation is often dependent on expensive equipment that most PIs would be unable to afford. I think that, as police procedurals become more forensics-driven, PIs will rely more on their knowledge of human nature and behavior. We may see more PIs with training in psychology and kinesics, but I’m not sure who will lead the way. Maybe some heretofore unknown person will come out of the mists and everyone will be slapping themselves on the forehead and saying, “Why didn’t I think of that?”

Q: Kirk Curnutt came up with the following question: If your PI suddenly found him/herself having to moonlight in a television program (due to the economy, let’s say), what show would s/he be on? And what TV character?
He’d be most likely to have his own horse training video series on RFD TV, or he could play the sexy sheriff of a yet-to-be created western. Of the shows currently slated to run on the major networks this fall, he’d be a good fit for Law and Order: SVU in a role similar to the incorruptible Detective Stabler.

Q: What question should we ask every PI writer we interview and what is your answer?
If your PI could choose to be a comic book superhero, which would he choose and why?

My answer? Batman. The other superheroes all have powers that give them an edge, but Batman is an ordinary man who makes himself extraordinary through his own choices and behaviors. (That inexhaustible wealth doesn’t hurt either; as a regular guy who’s struggled to make ends meet, Jared would be happy to have it—and use it for good, of course!)
Posted by jvdsteen at 3:16 AM

Excellent interview. Jared sounds like a character with great depth and many levels, and I look forward to picking up a copy of the book.

Thank you :) you should look at this emo boy hair over this blog:
http://www.emo--boys.info

Technology really has become one with our daily lives, and I am fairly certain that we have passed the point of no return in our relationship with technology.

I don't mean this in a bad way, of course! Societal concerns aside... I just hope that as technology further advances, the possibility of uploading our brains onto a digital medium becomes a true reality. It's one of the things I really wish I could experience in my lifetime.

[... ] is one another interesting source of information on this issue[...]