Curse of the Jade Lily (Rushmore McKenzie) by David Housewright

David Housewright & Rush McKenzie... A combination that never ever disappoints.
McKenzie, the rich ex-cop is asked to deliver the ransom money to some artnappers, trading it for a sculpture called the Jade Lily. A corrupt cop, a garbage disposal company, and a US State Department official are just some of the people involved in the case as well. Returning is Heavenly Petryk, fortune hunter after her previous appearance in Jelly's Gold. Heavenly is a wonderful, Catwoman-like nemesis to McKenzie's Batman.
The plot is pretty good and exciting but as always Rush is the element that makes this read so enjoyable. A perfect example how to make a PI hardboiled but extremely human an likable McKenzie is one of my favorite modern PI's. 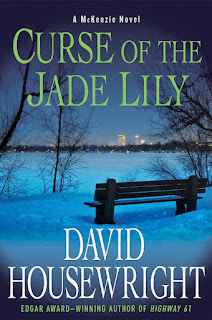 Highly recommended!
Posted by jvdsteen at 12:06 AM