Background Check on The Kill Fever (Wolf) by Dean Breckenridge 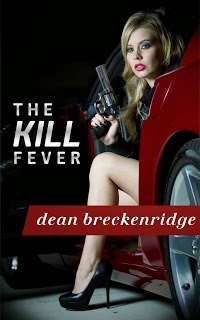 Under another name he told some tales I enjoyed. Now he is back as Dean Breckenridge with a new hardboiled series. I got a Background Check on his  book, The Kill  Fever is about. It will be sure to appeal to fans of my Mike Dalmas shorts.

Tell us what The Kill Fever is about.
I wanted to do something short and punchy and make it like the men's adventure books of the '70s and the hard-boiled of the '30s....so I created a sort of "Have Gun, Will Travel" for the inner city, featuring a character named Wolf. Nobody knows where he came from or why he chose the city, but he has connections with the cops and the crooks and always helps the underdog.

How long did it take you to write the novel?
More like a novella....it's only 20,000 words....and it took me two weeks to write. I spent another six months making it presentable.

Did it take a lot of research?
No. I made up the city,
the political structure, the gang structure, etc.

Where did you come up with the plot, what inspired you?
The plot is pretty simple, somebody is killing gangsters to start a mob war and Wolf wants it to stop, and the inspiration was thinking of the first paragraph as a way to hook the reader and get things going. Bodies in the streets, cops all around, what happened and who did it happen to....

Which scenes did you enjoy writing the most?
The hardest scene for me came in the middle of the book, where Wolf and another character are trapped, and I had to come up with a way to get them untrapped. I think my solution was ridiculous, but it worked and was fun to write.

Who is your favorite among the characters in the novel?
Wolf, the hero, of course; I also like his cop contact, John Callaway, who isn't sure Wolf is a good guy but knows he isn't a bad guy, either.

Is there anything else you'd like to say about the novel?
It's the first in a series and #2  (free today) is out now as well; I'm about to begin typing #3.
Posted by jvdsteen at 2:26 AM